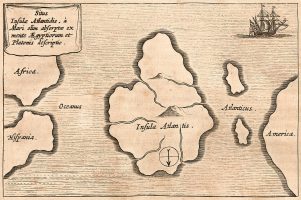 The myth of Atlantis is one of the most famous and controversial myths of all time. Ever since the myth began – with the Greek philosopher Plato – people have been asking whether or not his story of a sunken continent was a historical fact.

It is fair to assume that Plato did intend his story (which appears in the two dialogues Timaeus and Critias) to be taken historically, because he plainly insists that it was absolutely true – and everybody knows the great importance that Plato and his teacher, Socrates, attached to truth.

Plato claims that his account of Atlantis came from an Egyptian priest in the city of Sais (where there was a very important centre of historical studies), who told the story to Solon, the Athenian lawgiver and one of the seven sages of ancient Greece. This priest said that Atlantis was a large island situated in front of the Pillars of Hercules (in antiquity these were located on either side of the straits of Gibraltar). From there travellers could go on to other islands and from these islands to a much vaster continent to the west of Atlantis. Many people suggest that this much vaster continent was America, which does indeed meet this description.

Plato said that the sinking of Atlantis took place 9,000 years before Solon, i.e. approximately 11,500 years ago, or about 9,500 B. C. This is very interesting because it is the same date as the end of the last ice age. Scientists claim that during the last ice age the sea level was 130 metres lower than at present, and enormous areas of land were inhabited by different people. They also say that the sea level rose very quickly, because the glaciers thawed very fast. At that time there was a series of climate changes that significantly altered the face of the Earth.

The “Father of Western philosophy” gave us another relevant piece of information: he said that Atlantis was destroyed by a cataclysm and it is curious that almost all ancient peoples had a myth that spoke about the destruction of a humanity that lived before us by means of a flood. These flood myths have so many things in common that it suggests that they are related to the same story. Below, I have made an analysis of the different traditions, highlighting their points in common. I have grouped the myths together in cultural or geographical areas, to make the summary shorter and more accessible. Many of the myths have been simplified for reasons of brevity.

Indian myths about the flood are contained in the Shatapatha Brahmana (a Vedic commentary), the Mahabharata (a religious epic) and the Bhagavata Purana. Their main features are:

In this culture the Flood was considered a completely historical event. Echoes of the Flood have come down to us through of the epic stories of Uta-Napisthim (written about 1700 B.C and largely lost, only 13% survived) and Gilgamesh. Both have the following common characteristics:

Enoch was the grandfather of Noah, or at least, so it appears in this book. It is an apocryphal book in the Christian religion, that is, it may be inspired by God but was not included in the biblical canon. The new features we find with respect to previous traditions are as follows:

There were several versions of great catastrophes. The most relevant are:

Through the work of the Greek poet, Hesiod, “Works and Days” (a kind of history of humanity) and through Apollodorus, who completed the information, we have a story of the flood where humanity was destroyed, with the following main characteristics:

America has the greatest number of myths and legends about the Flood. We can find them from the Arctic Circle to Chile. We can highlight the following:

For most of the academic world today, the myth of Atlantis and the Great Flood have no historical value, mainly because this account conflicts at a fundamental level with the beliefs that are currently held. In the academic world there are a series of established ideas and beliefs that have become so ingrained that they have become articles of faith, and anything that does not fit in with them is regarded as pure fantasy. However, there are many archaeological discoveries that do not fit in with the conventional theories, some of which are exhaustively detailed in an interesting book called Forbidden Archeology: The Hidden History of the Human Race.  But such discoveries rarely come to the notice of the general public, because our society seems unwilling to accept that there might be gaps in our knowledge. Maybe this is the reason why Atlantis only interests a minority of people. But this is a dangerous tendency, because when a society thinks it knows everything, it begins to forget the little that it knows.