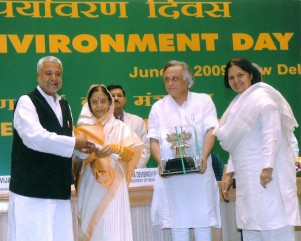 In Conversation with Nusrat and Afzal Khatri

Modern scientific research lends credence to the notion that our universe is an inter-dependant, profoundly unified system, infused with an immense amount of energy. Quantum physicists have proven that matter at a molecular level, far from being inert, is an active agent constantly making choices between alternate possibilities. James Lovelock’s Gaia Theory, which has gathered considerable support among Earth Scientists, holds that “the Earth’s physical and biological processes are inextricably connected to form a self regulating, essentially sentient system.”

These startling insights are transforming our view of reality, and our comprehension of human identity. The earth is not just our home. It is an inextricable part of us. We are an inseparable, living part of a mysterious and magnificent living universe. Consequently, our every action has ethical consequences and enormous reverberations as the scope of our empathy and compassion broadens to include all creation.

Nusrat and Afzal Khatri left a thriving packaging business and a comfortable life in America to return to India and found themselves responding to this perspective. Focusing on preservation of the environment, they began organizing clean up drives and planting saplings in the housing society in which they lived, before slowly expanding to the rest of their neighborhood. For the last six years they have been teaching at schools and colleges, converting local dump yards into lush gardens, and winning numerous Eco awards, including the Indira Gandhi Paryavaran Puraskar in 2007, India’s highest Environment Conservation award. Here are excerpts from our conversation.

THE ACROPOLITAN (TA): What made you decide to change the tracks of your lives so dramatically?

NUSRAT: When God has given you everything then you begin to think ‘what can I do in return?’ People thought we were mad to leave such a good life in America and return to India.

AFZAL: When we sold the business, we had no idea what exactly we were going to do in India. But we realized immediately that though our building was very nice, the surroundings were very dirty.

NUSRAT: Unknowingly, we are all guilty of committing a grave sin by not segregating our garbage. By allowing rag pickers to sift through it, to separate and salvage the things they can sell, through which they earn barely enough to feed themselves, we are in effect telling them “you need to fill your stomach, here, rifle through my garbage”.

AFZAL: We need to be more sensitive. We have developed a total immunity to these situations in our country. We have wrong notions that kitchen waste is filthy, that garbage is negativity, so just throw it out of my house. In fact all biodegradable garbage will naturally convert to soil. It is a natural & essential process to renew the earth.

NUSRAT: And it can be accomplished easily and with dignity. We talk about philosophy & spirituality but if you don’t put it into practice then what’s the use of that knowledge. There must be harmony between your thoughts, your words and your action.

AFZAL: So we decided we must act.

NUSRAT: Our streets were so full of debris that you could not even see the pavement. We hired four laborers whom we paid ourselves, and in three days we had picked up all the trash and put it on one side for the Bombay Municipal Corporation to pick up. When we phoned the BMC Officer he couldn’t believe his ears when we told him that we had cleaned up the street and all he had to do was just send a truck to take it away.

AFZAL: Nusrat took lessons in horticulture. I began learning about composting and how to convert waste into wealth. I soon realized that each of the buildings in our complex produces 150kg of garbage that ultimately finds its way to a dumping yard. There it putrefies, releasing toxins like methane (which is much more harmful than carbon dioxide). With rainfall and liquefaction these toxins seep into the earth and into our oceans destroying life.

NUSRAT: We started raising awareness in our building, educating and converting everyone slowly. We built two composting pits and planted over twelve hundred varieties of plants. Our building became zero garbage; everything was either put into the composting pit, or set aside for the rag pickers for recycling.

AFZAL: Our society won numerous eco awards. We then moved to the neighboring buildings, teaching them and helping them to build composting pits and maintain their gardens. We organized clean-up drives of our street. We worked with the resident doctors at Sion Hospital to facilitate removal of garbage. We began converting dumping grounds into beautiful gardens. The Samta Nagar Police Station was one of our biggest challenges. When we first saw the one-and-a-half acre plot it was a field of filth; thermacol, cloth, plastic, broken glass, rusted metal, wood, sawdust. I almost lost heart. But we asked the Principal of Thakur College if she would send us 20 volunteers. Instead she sent us 40 children everyday for 3 hours. It took us three and a half months of steady work just to clear the surface of the land. When we started digging and planting, even more garbage was unearthed.

TA: Today, six years later I’m looking around at a Paradise. Such a profusion of lush plants, flowers, trees, butterflies…

AFZAL: Yes, it is not just a garden; it is a bio-diversity park. When we first began planting we had only crows for company. Today we have documented 34 species of birds, 37 species of butterflies, 12 species of spiders, and many other life forms that call this place home.

TA: There is scientific evidence that plants can feel emotions and can sense emotions within us. do you believe they can?

AFZAL: One hundred percent YES! We communicate. Birds and animals communicate with each other. And so do plants.

NUSRAT: Once one of the oldest and largest trees in this garden fell down in a storm. It crushed and damaged some plants that it fell on, but you won’t believe what we saw when we arrived that morning. In this huge garden, all the plants, from one end to the other were limp, and sagging. Even the ones far away, untouched by the fall were all wilted and drooping. It was as if they were in pain, and bowing in mourning, as we mourn for a much loved or revered older family member. I could so clearly see the grief they were feeling and my eyes filled with tears.

AFZAL: This lasted for 2 days. Then all the plants and flowers slowly perked up and came back to normal.

TA: Tell us what you might have learnt from the experience of working so closely with nature.

NUSRAT: We are learning how to live life from Nature’s Laws. Life is but a reflection of nature.

AFZAL: Nature teaches you all the time, in her every action, but unfortunately we are not listening.

We don’t know how to learn. We don’t comprehend her value. Nature puts no price tag on her benevolence: sunlight, water, oxygen, without which no species can survive. But because it is free, we just don’t respect it. In theory we talk about global warming, but in practice we continue to arrogantly destroy our planet.

AFZAL: Plants and trees absorb the toxins we produce. They are natural sound barriers. They give us remedies for all illnesses.

NUSRAT: They entertain us with their color, fragrance and beauty. Do you know that if you cut off a branch 3, 4 or 5 more grow in its place? It’s as if nature is saying to us, even if you harm me, I will continue to give to you. She is truly a saint. Frank Lloyd Wright said, “I believe in God, but I spell it N-A-T-U-R-E.”

AFZAL: There is another quote by Hubert Reeves – “Man is the most insane species. He worships an invisible God and slaughters a visible nature, without realizing that this nature he slaughters is the invisible God he worships”.

We are part of nature and she is part of us. There are 1.8 million identified species on this planet. Man is just one of them. And all of us are interconnected. If one species dies out, the ripple effect causes chaos everywhere. Nature is one, seamless, inter-connected Being that we are a tiny part of.

NUSRAT: Once you understand nature, once you can connect with the wonder that she is, once you love nature enough to want to nurture and protect her, then you must sensitize others also.

AFZAL: The need of the hour is education. And this park is a font of information. That is why we building societies, rotary clubs, and foreign delegations are contacting us. But most importantly we must teach our children how man and nature are totally linked. So we bring children, from kindergarten onwards, here to help them understand the importance of trees, of rivers, of all life. Textbooks, theories and discussions can achieve nothing unless backed up with practical, on-the-ground experience. It is not enough to learn that dump yards can be turned into life-supporting habitats…it is far more crucial to realize that ignorance and apathy will turn our forests and oceans into garbage-dumps.

TA: What is your advice on the most practical way we can contribute to our environment?

AFZAL: In one sentence – eliminate toxins in the environment by solid waste management, and help generate more oxygen by planting more trees.

NUSRAT: People ask us all the time, ‘Do you know of a plot of land anywhere that we can adopt?’ And I always say there is no need to go so far away. Right here on your doorstep there is something waiting for you to do. Wherever you are, clean up the area. See to it there are no broken stones, dangerous open manholes. Call the BMC if you need to. Don’t leave it for someone else to do. And if you have to spend a few hundred rupees…well then, buy one less T-shirt, go to one less movie.

AFZAL: Small acts can make a big difference. We were in Agra to see the Taj Mahal. I passed through the security gate at the entrance and turned around to see Nusrat not moving. The security guard motioned her to move forward and she said, “There is so much dirt here. I am not moving till we all clean it up.” And she started picking up the litter.

NUSRAT: I told them “This beautiful monument is India’s pride. Foreigners come from so far away to admire it and we cannot even look after it at a basic level. Shame on all of us!”

AFZAL: By this time the head of security arrived with all his men to assess this situation. Immediately, with the security personnel and the people waiting in line behind us, in 15 minutes all the wrappers, banana skins, plastic bottles, photo rolls were all gone.

You see we must not just think. We must say it, and act on it ourselves. We need to set an example. Change requires a chain of actions, but without aggression, without conflict.

NUSRAT: It is very easy. You have to realize that you, even alone can make a difference. Wherever you are, plant saplings. We can give you free cuttings. Wherever you can, plant indigenous trees: Champa, Sontaka, Madhumalti. And be inspired by words of Dr. A.P.J Abdul Kalam. “I had a sparrow as a pet, but it flew away. Then I had a squirrel, but it ran away. I planted a tree, and they both came back.” 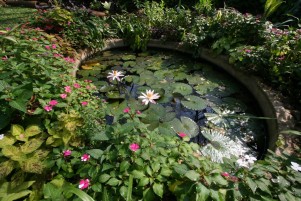 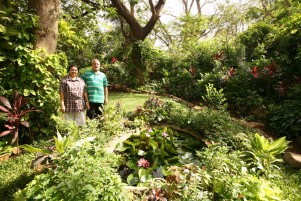 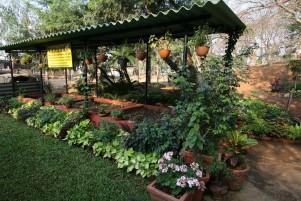 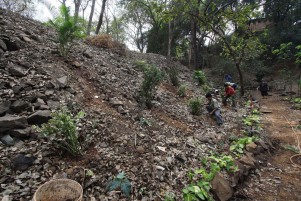 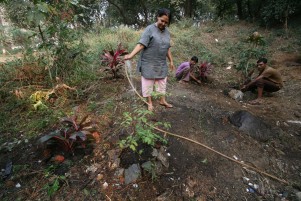 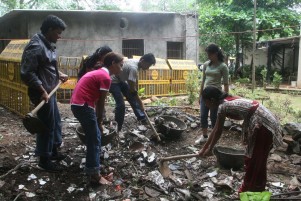 Read the original article on http://acropolis.org.in/wp-content/uploads/2016/01/TheAcropolitanJan-Mar2016.pdf