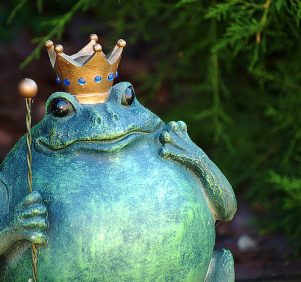 Our hectic city lifestyle seems to be far away from the world of fairy tales. However, their charm and hidden wisdom has been woven into the history of the world for such a long time that it has become part of the present and enhances it. Wherever we travel, local legends, traditions and symbols tell us interesting stories and the landscape appears more alive, customs more understandable and the character of people closer.

One of my favourite folk tales is the Frog Princess, and as told by philosopher Antun Musulin, it inspired me. So let me share it with you.

Once upon a time there were three brothers in search of a bride. To help them, their father advised them to shoot an arrow and look for a bride in the area where it fell. So, the young men shot their arrows and started their journey, each in a different direction. The first son wandered till he arrived at a splendid royal court, where he fell in love with a beautiful and noble princess. The second son wandered till he arrived at the magnificent mansion of a merchant, where he fell in love with the merchant’s daughter. The third son wandered for quite a while until he reached an unknown land of marvellous landscapes. The disappointed youth was very sad when he found a frog in a swamp holding his arrow in its mouth, but following his commitment he took the frog home as a bride. The story goes on, rich with details about how the brides had their tests and the frog outperformed everyone, being the most skilled in every possible art. She was the only one who could do magic and transform the ordinary into the special. It turned out that she was a beautiful princess who had been transformed by magic into a frog. When the third brother saw the real appearance of his bride he fell in love with her, but being impatient threw her frog skin into the fire. After that, his journey to find his princess again and bring her back from the magical realm started.  After many adventures he succeeded and, becoming a brave hero, won the right to marry her. And of course they lived happily ever after.

The story tells us about three scenarios from which we can choose: fame, wealth… or something else, which seems unattractive from the outside, but brings something special – a quest for the true essence of things and people, and true adventures that lead us out of our comfort zone, transform our life and enable us to discover new qualities. Of course, in the real world everything is mixed and only in fairy tales is everything clear, but still…