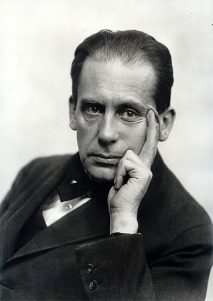 Four hundred years ago in 1516, Thomas More wrote his extraordinary piece of work ‘Utopia’. More derived the word Utopia from the Greek words ‘ou’ & ‘topos’, which together translate as ‘nowhere’. Rather than being a blueprint for a fantasy future society, Utopia is aimed much more at our faculty of imagination – it encourages us to dream in the now. As is often the case, it is through comparison that we are able to learn and better perceive our own situations. Through imagining this perfected society we explore the failings of our own and over the four centuries since it was written, Utopia has continued to be a source of debate and inspiration for many artists, thinkers and politicians alike.

We find a far from Utopian situation in Europe at the turn of the 20th century. The continent is clinging tightly to the reins of the Industrial Revolution whilst hurtling headlong into the calamity of the First World War. The consequences of this period in history were vast and far-reaching and the worlds of art and design responded radically to the horror of war and the rise of the machine.

Modernism – the umbrella term for many new schools of thought that arose in the aftermath of WW1 – was born. One of the most well known of the Modernist schools is The Bauhaus, founded in 1919 by Walter Gropius, a veteran of WW1. Walter was in fact the sole survivor of an attack on his platoon in which all of his fellow soldiers died. He was able to make a circular hole in the rubble above him, underneath which he was buried and by breathing through this hole he survived for two days until he was rescued. The stark manner in which Walter survived appears as if like a memory in mottos of The Bauhaus such as ‘form after function’ or ‘something that works well is a beautiful thing’.

“The Bauhaus strives to bring together all creative effort into one whole, to reunify all the disciplines of practical art – sculpture, painting, handicrafts, and the crafts – as inseparable components of a new architecture. The ultimate, if distant, aim of The Bauhaus is the unified work of art – the great structure – in which there is no distinction between monumental and decorative art.” – The Bauhaus Manifesto

What lies at the heart of The Bauhaus is an idea that art and design both could and should transform society. There is a will to strip back the layers of chaos, peel away that which is unnecessary and reveal something essential. Like the imagined Utopia, The Bauhaus aims to work harmoniously and lead towards a new vision better suited to humanity.

“So let us therefore create a new guild of craftsmen, free of the divisive class pretensions that endeavoured to raise a prideful barrier between craftsmen and artists! Let us strive for, conceive and create the new building of the future that will unite every discipline, architecture and sculpture and painting, and which will one day rise heavenwards from the million hands of craftsmen as a clear symbol of a new belief to come.” – The Bauhaus Manifesto