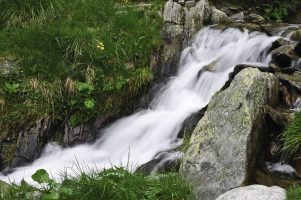 Few people in the English-speaking world today have heard of Viktor Schauberger, let alone of his discoveries about the nature of water. And yet, Schauberger’s ideas about water are arguably as important as James Lovelock’s Gaia Theory of the Earth as a self-regulating system[1]. Schauberger asserted that if we treat water only as a molecular compound, we not only do it an injustice but we also harm ourselves.

Viktor Schauberger was born in Upper Austria in 1885 into a family of foresters. His family motto was “Faithful to the Silent Forests”. After seeing the effects of a university education on his elder brothers – they returned with what he called a “technical-academic mentality” based on a “nature-alienated science” – he made up his mind not to follow in their footsteps and instead became a forester.

Through patient observation of nature, he learnt to understand many of water’s secrets. His key discovery was the so-called spiral-vortical motion of water which I will describe later in this article.

Schauberger’s rise to fame and notoriety came when he was commissioned by his employer to build a log-flume for transporting felled logs to the sawmill in a cost-effective manner. He did it so effectively that his employer began to cut down more trees to make more money, and as a result Schauberger resigned and dedicated the rest of his life to campaigning and inventions.

He attributed his success with the log flume to his observations of the movement of a snake and the shape of a chicken’s egg. Watching a snake swimming across a fast-moving current in a double spiral motion (a wavelike combination of vertical and horizontal curves) made him realise that if the logs could be made to twist in the same way by fitting counter-curves to the sides of the flume, they would avoid causing jams as they travelled down it. Thanks to the counter curves which he had had installed, even the largest and heaviest logs moved down the flume like snakes twisting and twirling in the water.

As for the inspiration of the chicken’s egg, he used its shape in the design of the dam wall at the bottom of the flume, in such a way that there would be no build up of water pressure because the water would be forced to flow back against itself, causing its momentum and destructive power to be greatly reduced.

The majority of forestry commissioners and hydrologists were against his design and were furious when it worked perfectly, because it contradicted all their theories. The hydrology of his day maintained that water was merely a chemical substance and should be channelled in the straightest, most direct paths to its destination for maximum efficiency. Schauberger believed the opposite: water for him was a living being or substance, with certain vital needs (such as spiral, meandering motion), which, if denied, became aggressive and destructive – eroding riverbanks, for example. “Nature’s ways,” he said, “are always indirect.”

Another discovery came to him as he was crossing a fast-flowing mountain stream. As he was doing so he dislodged a stationary trout with his staff, which immediately shot upstream at high speed. As a result of this experience he asked himself a number of questions: 1) How had the trout got to this position above waterfall in the first place? (2) How did it manage to remain stationary in the midst of a raging torrent and then, how did it actually manage to overcome the resistance of the water and its own bodyweight and move against the currents with such ease and speed?

On another occasion, he observed that moss was bending upstream at the bottom of a stream, in spite of the fast flow of the water. This seemed to be similar to the phenomenon of the stationary trout.

His explanation for these phenomena was the “longitudinal vortex”: by turning around its own axis in a helical motion the trout had created a counter-current which enabled it either to remain stationary or, by flapping its gills and creating further vortices, to move rapidly upstream with remarkable speed.

The longitudinal vortex of water in a naturally flowing river tends to flow in the centre of the river. Because of its vortical movement, it draws matter towards its centre, so that the the heaviest matter – the densest water, at 4°C – will be found at the centre. It is into this central vortex that the trout finds its way and, once there, as if in a cocoon, can remain for as long as it likes, waiting for the food of the river to come flowing into its mouth. This is why rainy or turbulent days are good for fishermen in such streams because the trout cannot maintain its position when the water is warm or the temperature is frequently changing.

The other question which Schauberger had asked on seeing this trout was – how had got there in the first place? It was high up in the mountains above a waterfall – how could the trout have managed to get past such a formidable obstacle?

The answer to this came on another occasion when he was lying in wait for a poacher beside a pool beneath a waterfall. Suddenly, he saw all the little fishes scatter as a huge trout came into view. It headed straight for the base of the waterfall and began to swim round it in an egg-shaped fashion, describing a kind of dance. “All at once,” says Schauberger, “it disappeared under the fall of water, which fell like liquid metal into the pond. The trout suddenly stood up on its tail and in the conically converging stream of water I perceived a wild movement like a spinning top, the cause of which was not immediately apparent. Having temporarily disappeared, the trout then re-emerged from this spinning movement and floated effortlessly upwards. Upon reaching the underside of the topmost curve of the waterfall it did a quick somersault in a high curve upstream and with a loud smack was thrown beyond the upper curvature. With a powerful flick of its tail fins it disappeared.”

Through these and many other observations, Schauberger came to believe that vortical motion could be used to create a sustainable technology for the future. He developed a number of remarkable inventions. One of the most important of these was the ‘implosion motor’. “Implosion is a suctional process that causes matter to move inwards, not outwards as in the case of explosion. This inward (centrifugal) motion, however, does not follow a straight (radial) path to the centre, it follows a spiralling, whirling path. This is called a vortex and is the secret of nature.”

Schauberger felt very strongly about the need to protect nature and promote a sustainable technology. He understood how important water is for life on earth and saw how our civilisation is ‘killing’ water.

The water which we drink and use for washing nowadays is lifeless, polluted with chemicals, delivered to homes in straight rivers and pipes. Even mineral water is kept in straight transparent containers, whereas the ideal conditions for water are cool, dark and de-oxygenated.

Naturalesque, serpentine rivers rarely overflow – ‘Nature is wise’, Schauberger would often repeat, in the manner of Pythagoras. In straight watercourses, on the other hand, silt (nutrients) sink to bottom and cause flooding – nature’s way of returning water to untouched underground streams, from where they can rise again and flow naturalesquely. Forests are also central to water production, the health of rivers and agriculture. Lifeless water, on the other hand, is aggressive, causing both flooding and drought.

I would like to pay homage to this heroic individual who followed his path in service of nature and humanity despite all the forces ranged against him. From his own experience he once said, “Nature directs and protects those who honour and faithfully serve her.” Reading about his life and discoveries, I did indeed have the impression that Nature helped him to make his discoveries and also protected him against his many enemies.

Article References
[1] The Gaia hypothesis, also known as Gaia theory or Gaia principle, proposes that all organisms and their inorganic surroundings on Earth are closely integrated to form a single and self-regulating complex system, maintaining the conditions for life on the planet. In 2001, a thousand scientists at the European Geophysical Union meeting signed the Declaration of Amsterdam, starting with the statement "The Earth System behaves as a single, self-regulating system with physical, chemical, biological, and human components." Callum Coats, Living Energies, Gateway Books, 1996 Viktor Schauberger, Nature as Teacher, Gateway Books, 1998 Hans Kronberger & Siegbert Lattacher, On the Track of Water’s Secret, Uranus, 1995
Tags: conservation, energy, nature, Viktor Schauberger, water