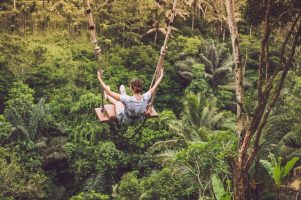 Over the course of time, there has been a progressive coevolution between plants and humans, with domestication possibly playing an integral role in this symbiosis. Some anthropologists propose that, before plant domestication began, carnivorous hunter gatherers had to seek alternative options during droughts, subsequently tapping into the seasonal cycles, and would have started remembering where particular plants grow, discerning signs when best to eat, and what plants would elicit certain physiological and psychological responses. Humans would eventually have learnt cultivation techniques to meet their requirements, creating a mutual dependency.

If we scale down the metric of planet Earth’s origins from 4.6 billion years to just 46 years, land plants would have existed for nearly 3 weeks, dinosaurs going extinct nearly 3 days ago and human beings arriving in the last 4 hours. In the last minute, we would have moved from hunter gatherers and foragers to converting over 35% of the Earth’s land surface into farms, domesticating plants for many purposes such as food, clothing and construction materials.

It could be easy to assume, with humanity’s ability to transform the planet’s landscape through civilisations, industry and technological advances, that humans possess advantageous capabilities over other life, being the alpha inhabitants of Earth.

However, as estimated by archaeological data, land plants have been around for approximately 470 million years longer than humans. The adaptations, sophistication and phenomena that plants have exhibited to survive is an operation worthy of acknowledgement. Just because plants are unable to write poetry, manufacture electronic devices or take photographs, it doesn’t necessarily mean that a plant’s dimensions of intelligence are inferior to our own. We are descendants, standing on the shoulders of a giant plant evolution.

The late ethnobotanist and author Terence McKenna once said: “Animals are something invented by plants to move seeds around. An extremely yang solution to a peculiar problem which they faced.”

Whether said in jest or not, our reliance on plants is incontestable: the oxygen we breath, the carbon sequestration, medicine, sustenance, shelter, clothing and so on. Throughout the ages, humans have certainly been active participants in seed and specimen distribution around the world, providing sanctuary and preservation to endangered species, via seed banks and botanical centres such as Kew Gardens in London.

Some of the earliest recorded domesticated crops were fig trees, flax, wheat and peas, dating as far back as the 9th millennium BCE. These findings were located in an area known as “The Fertile Crescent”, which stretched from the Nile to the Euphrates and Tigris rivers in the Middle East. Without agriculture, it is unlikely we would have created civilisations, as it freed up people’s time to develop in other ways, rather than having to prioritise their focus on foraging and hunting.

The symbiosis between humans and plants can also be seen in the molecular composition of plants, mimicking vital human metabolites. Although for thousands of years we have known of plant medicines and their effects, it is mainly since the 20th century that the pharmaceutical industry has been able to isolate and patent compounds, synthetically manufacturing drugs through such discoveries.

In the 18th century, pioneering botanist Carl Linnaeus was a pivotal figure, revolutionising our relationship with plants through classification, as not knowing the names of things, our knowledge of them also perishes. Linnaeus believed nature’s economy should be the foundations for our own. He said that an economist without knowledge of nature is like a physicist without knowledge of mathematics.

These words have great potency today, as for the last two centuries, especially since the British Agricultural Revolution commenced, our symbiotic relationship with plants has radically transformed into a false sense of ownership, with the exploitation of the planet’s resources for capitalist demand.

Mass-scale industrialisation has replaced farmers and natural practices with artificial interventions, using machinery, genetic modification, synthetic fertilisers and pesticides, all of which has been well documented for its unfavourable effects on the environment.

Farming methods like monoculture, which has created large-scale deforestation, eliminating ecosystems along with their biodiversity, cannot be managed without the intoxicating use of artificial means. For example, plants need diverse ecosystems to flourish as they cannot survive as a singular crop naturally. By removing trees, we are also removing a carbon sink, as well as vital shade for the soil; consequently, the land dries out and becomes barren, depleted of nutrients, which are the basis for any ecosystem.

Fortunately, in the last decade or so there has been increasing awareness of the need for more ethical and holistic practices, such as permaculture, biodynamic farming and agroforestry, to name a few, along with sustainable and recyclable alternatives to replace the likes of plastic production, mining and fracking. Whether they will be incorporated into global industry is another question altogether.

What Linnaeus might have been trying to say is, if we work with plants with reverence for their needs, they can cater naturally for our own. As exemplified in recent times, when we divert from a harmonious symbiosis, it can invite sickness and threaten not just plants, but life on the planet as a whole.

“The wisest and noblest teacher is nature itself.” – Leonardo da Vinci