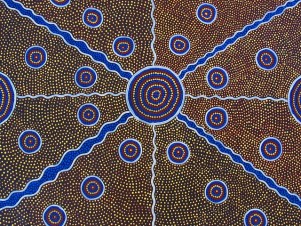 Australia is the sixth largest country in the world, with an area of 7.6 million km2. It is a developed country and one of the wealthiest in the world. Its aborigines arrived 40,000 – 60,000 years ago, probably travelers from Asia who had a great ability to adapt to new circumstances. Europeans came later on in the 17th century, including Dutch, English and French, because until then, Australia was an unexplored land. Somehow it managed to keep isolated, away from external influence, while developing and evolving a rich culture that was clearly in a harmonious relationship with nature. Studying the aboriginal culture can be a source of inspiration for broadening the Western mentality and its particular approach to the use of natural resources, relationship with animals and the Earth, and even the way we design buildings and wear clothes.

Although the population has been greatly reduced, the culture is still very much alive. It retains its practices and rituals, and continues to produce art and literature. Australian aborigines are moved by spiritual values which are an essential element in their daily life and social interactions. Myths have been transmitted and shared amongst communities, trying to preserve the sacred celebrations and rites. They believe that things such as caves, mountains, lakes and trees were created by their ancestors; ancestors who were in appearance half human and half animal and who moved around, hunted, had rituals, laughed and by doing all these things the Earth started to take shape. Some particular locations are seen as meaningful to the community due to totemic qualities attributed by the ancestors. People participate actively in ceremonies and elderly people are well respected because of their wisdom.

Interestingly, all sorts of things are considered to hold the presence of a spirit and in the case of human beings, this spirit returns to its source when the person dies. One of the most outstanding ideas is the strong connection they have established with nature, understanding that humans aren’t superior but part of a greater manifestation which has a superior essence. Perhaps because people were exposed when harvesting or hunting, an appreciation and respect were born naturally and the fact that there is a dependency on nature also made them look after it with gratitude. Food was not taken for granted but seen as an opportunity for developing gratitude. People didn’t celebrate birthdays but instead celebrations were held when someone wanted to share an improvement, an inner or outer achievement. Their different and higher state of consciousness was reflected in their behaviour towards stones, animals, plants and invisible entities. They used senses like smell, hearing and sight, and the perception of more subtle vibrations or communication through telepathy were realities for them.

People who have interacted with these communities have been touched by the attitude of the Australian aborigines towards accepting the trials of life, and the way they were able to detach themselves from objects and mindsets, keep up their ceremonies in order to bond with nature and embrace the idea of ‘karma’ through the analogy of the boomerang. Whatever we do will come back to us. Telling the truth, realising the power of thoughts and the energy that is channelled in whatever we do are other examples that are universally applicable today. We might not be in Australia, but in every part of the world principles like the ones mentioned can definitely make a difference to the way we live and project our existence.

If any images used in this article are in violation of a copyright, please get in touch with webmaster@acropolis.org.in as soon as possible. Appropriate action will be taken.
Image References
By esther1721 | Pixabay | CC BY Pd