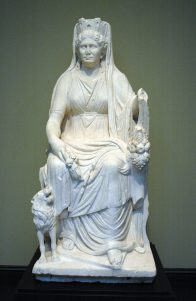 In many cultures, the concept of Mother Earth, the Great Mother existed and was worshipped in various ways. In Egypt she was represented as Isis nursing Horus, in Mesopotamia as Cybele, a seated figure with a lion on each side and large breasts symbolising the fertility and protection of the harvest and grain; while in Rome, as Tellus or Terra Mater, she was known as Mother Earth.

In Greek Mythology, Gaia (Gaea) was known as the Mother Nature who provides the life force for all beings. She was the primal Earth Mother from whom all life came. According to Hesiod, in the beginning there was only Chaos and then broad-flanked Gaia (Earth) and Eros (primordial generative force) arose. Gaia brought forth her equal, Uranus (Sky). Then Titans and Titanides came into being, whence oceans, hills and all parts of the Earth arose.  She was also an important Goddess in the second generation of Greek Gods and passed her powers to the second generation.

As an archetype, Gaia represents balance and harmony on the Earth and wholeness in the universe. Gaia is a symbol of the Earth where everything is connected and the living force of nature is maintained through the ecosystem.  She rules over all the kingdoms, including minerals, animals and humans, and she rules over the giving of Life.