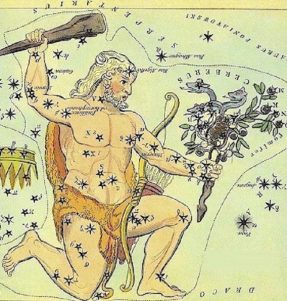 The starry sky fascinates us with its beauty and mysteries. Its can also tell us many stories that we can relate to. The Pole Star is a symbol of the immovable centre around which everything revolves, a symbol of eternity that transcends the world of time and change in which we are born and live. It is around this axis mundi, the world tree, that an ancient stellar dragon whirled his massive body.

The constellation of Draco, which means Latin ‘dragon’ in Latin, can be seen in the northern hemisphere. It is next to the constellation Hercules named after the ancient hero. Together with Hercules, Draco was first catalogued by Ptolemy in the 2nd century BC. As a true protector of eternity it never disappears from the starry sky – Draco does not set below the horizon.
The legends of Ancient Greece and Rome tell us that Draco might be a dragon put into the sky by the powerful goddess of wisdom Minerva during the Battle of the Titans.

Another myth names him Ladon, the protector of the garden of the Hesperides.  The legend about the hero Hercules tells us a story of a beautiful orchard hidden far away in the west where day and night met each other and Helios’s chariot finished its long journey. This garden belonged to the goddess Juno, and featured a true marvel – a tree that bears golden apples. It was a wedding gift from Mother Earth herself to celebrate a union between Juno and Jupiter, the king of the gods. Its fruits had the magic power of granting immortality to whoever tasted them. Juno’s orchard was guarded by the nymphs of evening and the golden light of sunset – Hesperides, hence its name. The goddess also added a special guardian to her garden – the never-sleeping, hundred-headed dragon Ladon.

Hercules was tasked to get those golden apples. And it was the hardest labour of all. First of all, he did not even know where to look for the garden.  He travelled the world fighting different monsters and forces, even had to battle with Mars. Jupiter sent a lightning bolt to separate the two. The hero continued his journeys until he caught the shape-shifting and all-seeing sea god, who told him the secret location of the garden of the Hesperides. On his way there, Hercules fought with Busiris, the son of Neptune, and liberated the land from his cruel rule. He also freed Prometheus, chained to a mountain for his theft of fire from the gods. The Titan told him the secret of how to get the golden fruit.

After a long journey full of battles, the hero finally arrived at the orchard and took the burden of the heavens onto his shoulders while Atlas helped him to get the golden apples. Hercules also had to slay the fierce guardian dragon.The labour was completed and Hercules got the golden apples of the Hesperides. However, in the end he had to return them to Juno. The goddess put both the dragon and the hero who gained eternal life among the stars.

Alpha of the Hercules constellation is called Ras Algethi, which means the Kneeler’s Head. Although Hercules is victorious, he bends his knee before the dragon, the guardian of the wisdom and eternity that the hero gains.