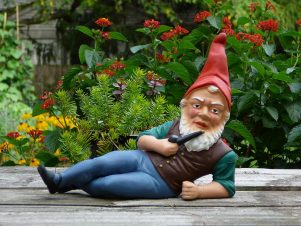 Folklore and fairy tales are well known for describing all sort of incredible creatures: gnomes, dwarfs, mermaids, pixies, giants and speaking animals and birds. The famous alchemist Paracelsus made a classification of these mostly invisible beings and called them ‘elementals’ or ‘nature spirits’. He said that they can be found within the Earth (gnomes, fairies and dwarfs), in the depths of the oceans, lakes or rivers (sirens, nereids, undines and nymphs), in the highest strata of the atmosphere (sylphs and elves) and in the phenomena of fire (salamanders).
If it were not for two brothers from Germany, Jacob and Wilhelm Grimm, however, many of these traditions would have been lost. Whilst still at the university, these two Philologists began a lifelong dedication to researching the early history of German language and literature, including folk tales. “The ardour with which we studied Old German helped us overcome the spiritual depression of those days,” wrote Wilhelm in his autobiography. They began their collection with the purpose of preserving the stories as they had been handed down from generation to generation, recognising that the practice of storytelling was threatened by increased industrialization.
It is not possible to cover all the nature spirits in one article, so I will just focus on the most well-known of them, who even appear to this day in some English gardens: gnomes. The word ‘gnome’ derives from the Greek, meaning ‘one who lives in the earth’, and refers to a creature about one foot tall but otherwise similar in form to a human being. Many authors of fairy tales chose to refer to these beings as ‘little grey men’ or ‘little folk’ thus avoiding getting entangled in the complex hierarchy of Earth elementals. Sometimes they are called interchangeably ‘dwarfs’ or even ‘elves’.
In Grimms’ fairy tales, dwarfs are represented as cautious, sensible and kind little creatures (Snow White), who are quick to help those in need, reward kindness or punish arrogance and pride (The Three Little Men in the Woodand The Golden Goose). They may offer their services in exchange for something precious that they desire and will scrupulously adhere to the arrangements agreed by both parties. They do not enjoy being outwitted and may be quite self-destructive in their anger (Rumpelstiltskin). Sometimes they act as guardians of enchanted places or treasures and prefer to communicate by signs rather than spoken words (The Queen Bee).
In some ways gnomes or dwarfs look different from humans, for example in the tips of their ears, which are pointed, which would explain why in the story The Shoemaker and the Elves, they were called elves rather than dwarfs. On another level, this tale relates to the times before work had become automated, when the little gnomes were believed to be the craftsmen’s invisible companions and helpers.
Nowadays most people treat stories involving nature spirits as pure fantasy, only useful for stimulating children’s imagination. But for those interested in researching the subject more seriously there are many books recording experiences of nature spirits in different parts of the world and explaining the rationale behind these beliefs, such as Evans-Wentz’s The Fairy-Faith in Celtic Countries or J. A. Livraga’s The Spirits of Nature.
Nature will almost certainly outlive our present human activity and perhaps the nature spirits will also survive. But in view of the universality of the traditions it might be worth enquiring into their possible existence, which might bring some much needed magic into our lives.