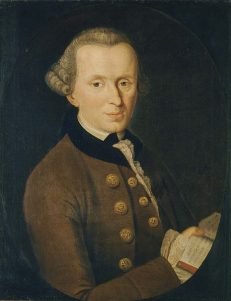 In the second half of the 18th century Immanuel Kant formulated a new a golden standard for human relations: “Act in such a way as to treat humanity, whether in your own person or in that of anyone else, always as an end and never merely as a means.” This maxim has influenced numerous other philosophers and legislators, impacting on the constitutions of many countries and the Universal Declaration of Human Rights.
It was one way of formulating the moral law that Kant believed we all share as rational beings.
The philosopher’s search for the moral law began with an acknowledgment of universal feelings for the good and for the “beauty and dignity of human nature”. However, being a thinker of the Age of Enlightenment he could not allow a feeling to be the foundation of morality, as feelings are changeable. According to Kant, it is thanks to our reason that we experience a need for moral obligation.
As rational beings we are endowed with the moral law within us and through our reason we understand it, can formulate its commands, feel respect for it and the duty to act upon it. That duty is not something imposed from outside by family, society, education, etc., but grows within us naturally as a response to the moral law.
The other particular feature emphasized by Kant is that a human being is capable of acting in accordance with the moral law and is truly free to do so. This is the only real freedom we have – to be morally worthy beings. It is not freedom from any obligations, but freedom to be governed by reason and the moral law. Otherwise we are ruled by desires and inclinations, and only appear to be free. Kant says that reason causes us not to be content with idleness and pleasure, and it prompts us to develop our full potential to honour our humanity and the humanity of others.
Thanks to this capacity of every individual to discover the moral law and be bound by its duties, to reason independently, to make their own decisions and implement them, all individuals are ends in themselves. To treat ourselves as ends means to practise the moral law − to develop virtues, overcome challenges in life and acquire moral strength and self-esteem. Kant lists some duties we have towards ourselves, which include the duty of self-perfection and the duty to be happy.
Treating others as ends includes allowing them the same freedom of choice and accomplishment, respecting their dignity. It would be a violation of one’s own dignity to violate the dignity of another and treat them merely as a means. Kant defines some of these duties that we have to others, including the duty of beneficence to others, the duty to sympathize with others and the duty of gratitude.
Being ends in themselves therefore means that every person has intrinsic, unconditioned, incomparable worth, which Kant calls dignity. We all interact with others and may be means for each other in some respects. But if we don’t acknowledge our dignity and the dignity of the other, we and the others cease to be ends, and such interactions diminish us.
Kant was an advocate of a harmonious and peaceful life within a community. His ideal was a kingdom of ends – “a corpus mysticum of the rational beings in it, insofar as the free will of each, under moral laws, is in complete systematic unity with itself and with the freedom of every other”.
At the end of his Groundwork for the Metaphysics of Morals, Kant offers another formulation of the moral law: “Act in accordance with the maxims [rules] of a member giving universal laws for a merely possible kingdom of ends.” In other words, he invites us to act as if we were creating an ideal morally worthy world. In order not to be overwhelmed by such a grand task, we can start by creating an ideal ethical community, which is “an indispensable vehicle of humanity’s moral progress”, as Kant pointed out.