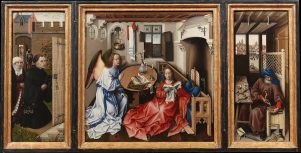 Iconology uses images and symbols to express a meaning or an idea. For many centuries, it helped to transmit religious and philosophical messages in an artistic way, when film or photography did not exist. Iconology is closely connected to iconography, which on the one hand is a branch of art history researching the interpretation of images and paintings, and on the other hand is the study of religious images, called icons. Icons, the sacred paintings in the Byzantine tradition and in the Orthodox Christian church, serve religious purposes, they are not just simply artworks.

Emblems and images are as old as mankind. Paintings of animals in caves, such as Chauvet or Lascaux, were made tens of thousands years ago and, without any text, their meanings can be identified and help researchers to understand better the life of the people in those ages. Later, in Egypt, symbols became a sophisticated language when hieroglyphs were developed. It was a formal writing system where images represented words and sounds. Egyptians also used logo techniques when they could enlarge or miniaturize an image by using grids. Meanwhile in China, calligraphy was developed, combining visual art with literary meaning.

In Europe, during the Middle Ages, bestiaries (books of beasts) depicted the creatures of nature along with moral teachings. These books regarded the world as the manifestation of God, in which all creatures have their own place and goal. The bestiaries were very popular as they helped the reader to understand the world in its complexity. The texts were based on ancient books that were dedicated to the description of nature. The Aberdeen Bestiary from the 12th century was one of the most well-known book of that time. In the folios of this compendium, which starts with Genesis, Adam names the animals, including mythical ones like the phoenix. Bestiaries influenced heraldry as well, giving ideas for making coat of arms.

In the 16th and 17th centuries, emblem books were published with the aim of collecting and explaining classical symbols and images. Although these books were largely based on the medieval bestiaries, they used ancient sources such as the Platonist writer Plutarch to explain an image. In their pages, there were three parts: the image or icon, a motto or wise saying, and the explanation of the connection between the two. In the western part of Europe, dozens of emblem books were published, thanks to development of printing. One of them was the Iconologia by Cesare Ripa. Ripa was an Italian iconographer from Perugia and his work was published in 1593 without, and then in 1603, with illustrations. In England, it was first published in 1709. His book was influential in later centuries as well, as it was a summary of the knowledge of his time.

In the Iconologia, Ripa collected images of virtues, vices, passions, arts, humours, elements, and celestial bodies, and put the moral emblems into alphabetical order. He dedicated his book to orators and artists, such as poets and painters, to use as a handbook from which they could borrow ideas for their work. For example, Flattery is portrayed by a woman who is playing on a flute. By her legs, there is a buck, and nearby, a beehive can be seen. In the explanation, he wrote: “A woman in an affected wanton habit, playing upon a flute, a buck at her feet falls asleep, with a beehive by her side. The buck denotes flattery, because he is so charmed by the music, that he lets himself be taken. The bees are a true emblem of it, carrying honey in their mouth, and a secret sting.” In this way, Ripa grasps the essence of the emblem and provides a moral teaching as well.

Icons and emblems are all around us in contemporary societies as well, where they are used for practical as well as moral aims. Like the exit sign with a running man in a door, often in green colour, which expresses the escape route that has to be followed by people in case of emergency. Or the rules of the road are based on emblems that the drivers must be capable of understanding in order to drive safely. This proves that icons still play a vital role even nowadays.