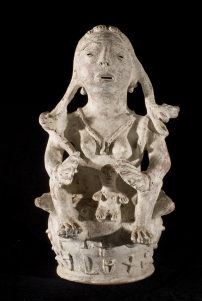 Africa is a vast continent with many different peoples and a diverse diaspora whose cultural and spiritual heritage has often been misunderstood and misrepresented through colonial and Western perspectives. The ability to move past assumptions and conditioning always presents a challenge, which requires that we aim to see the essence of human life and experience. The philosopher seeks this essence and the profound depths often hidden behind the veil of myth.

Africa has been home to human beings and their ancestors for over 4,000,000 years and is often considered the birthplace of human life. In the myths of the Nilotic peoples and the Ewe tribe of Togo, there is the common idea that man is made out of clay. The use of clay to describe human beings is also found in some ancient Egyptian myths, as well as the Bible. What does it suggest? From a traditional point of view, clay describes the properties of matter. Malleable and infinite in the shapes that it can take on, it is ever subject to change, can become rigid and fixed in forms which are fragile and eventually disintegrate, returning to the Earth… What moves and shapes the clay? In the creation myths of Africa, it is often a great creator God, who also ‘breathes life’ into the ‘clay’, bringing it alive in the form of human beings. This ‘breath of life’, the mysterious consciousness, at once energy and spirit, impresses itself on the clay, transforming it into something entirely different.

Another common idea in African myths is the slightly tragic way in which human beings learn about their ultimate fate – death. In the Nzami myth, Fan, the first man, was himself immortal but became arrogant and was duly punished. The new man who succeeded Fan was created differently with ‘his head turned’ in order that he could see death. Unlike the immortal Fan, this second man had two parts: one immortal, one mortal; a soul and a body. In several other myths, God sends an animal messenger such as a leopard or a dog to tell man that he is immortal but something goes awry and the journey is interrupted; meanwhile, another messenger arrives first and distorts the message, telling man that he is to die. In these myths, man is again neither quite mortal nor immortal. There is a sense of ambiguity and the tragedy is that man has accepted death as his fate; and often, even when the true messenger gets to him and explains, man cannot accept the other message.

It is common for African traditions to have an animistic view of the world, where everything is alive and populated by spirits who can be communicated with in particular ways. A beautiful myth from Niger and Congo which goes someway to illuminating this viewpoint is of a ‘divine root’ from which everything has its essence and into which everything will eventually dissolve back. Nothing exists outside of this one source. Amongst the Bushmen there is also something similar to the ‘Yggdrasil tree’ of Norse mythology, a primordial tree from which all living things are born. These myths represent a profound concept of the human being and our position in the Universe and our relationship to all other life. We find these ideas not wholly different from scientific theories of the origins of the Universe, not to mention the myths of other traditions Where the scientist might refer to an atom the African myth may refer to the seed.

These myths of Africa have nourished and guided the hearts of countless generations and still inspire some today. They are a precious jewel in the wealth of human experience and a rich source of inspiration for the lover of humanity, nature and wisdom.