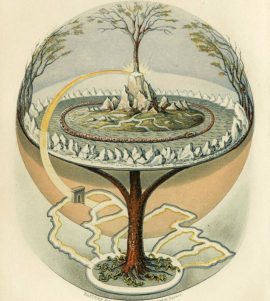 You may not know it, but as a child, plant allegories may have left a bigger impact on you than first imagined. Vivid and captivating fables, like conceptual seeds that were sown in your mind through fairy tale and superstition.
Plant lore, like any other, has its roots in vague beginnings, and prior to any records it was reiterated in oral tradition, passed on by the predecessors to the next in line. Until scribes made these unwritten accounts noteworthy, the context of these stories would be susceptible to change, altering in the course of transmission.
Eventually, these iterations were literalised, plant themes inked into symbol and metaphor, laced into detail within the frameworks of paganism, religion, alchemy and art. Plants themes are ubiquitous, yet distinct in their motifs, underpinned by the region’s peculiar flora, its characteristics and elicited effects. The Cacti in central America, Myrrh trees in Arabia, or Sausage trees in Africa, each native with individual myths.
Despite many plant species, there are also constants, like the constituents to what makes a tree a tree, which prompt similar themes. The Tree of Life is a universal archetype, detailing the unification of the underworld (roots) to the transcendental realms (flowers), that can signify a map of our inner suffering and awakening. A popular example of this figurative tree is found in the Grimm’s fairy tale, “Spirit in the Bottle,” an alchemical concept where a boy encounters revelations after discovering the life spirit in a bottle, at the roots of a large Oak.
Mandalas are another theme, projecting a geometrical symmetry of symbols like that of a flower head, as used in Hindu, Christian and Mayan tradition. A Flower’s bloom reflects the seasons like a salute, or a marker on nature’s calendar. Spring flowers such as Iris symbolise fertility for its sensual appearance, and a rainbow for its gleaming iridescence. In a German folk tale, the snow used to have no colour, so the snow asked the flowers to share some of their vibrant hues, all of which stubbornly declined and were repelled by the snow. Only one showed pity with a drooping head: it was the ‘Snowdrop,’ who shared with the snow its pearly white splendour.
Various plants are eponymous of legends or epics in myth; the very term ‘Flora’ derives from the Roman deity Flora, a goddess of spring blossoms, fertility and vegetation. The Narcissus flower is another example, also known as the Daffodil. Greek myth has it that Narcissus paid no attention to his adorer Echo, as he was too busy being self-consumed, spellbound at his own reflection, eventually wasting away and morphed into a daffodil. Subsequently, the narcissus flower has been known to symbolise a one-sided love relationship.
The Irish Druids, on the other hand, were named after their sacred tree of worship, the Oak, the life force of their Gods. Druid translates to ‘Man of the Oak’, and to catch a falling Oak leaf would signify good luck. So large was the Oak, it took the brunt of lightning strikes, and for each strike it took, it received a mistletoe from the Gods. It’s a symbol of protection, as is the evergreen Holly tree through autumn and winter. Holly sprigs were used in divination and hung as wreaths in homes to ward off evil.
In ancient China, Xiwangmu, Queen mother of the west, feasted on the peaches of immortality, which took three thousand years to ripen in the paradise of Mount Kunlun, and invited other Taoist Gods to her divine banquet to indulge in the juicy immortal flesh. Taoist sorcerers were later known to posses wands made of peach wood to dispel danger, and used their petals to induce enchanting effects on men. To receive a peach in China is a blessing for longevity; peach blossoms are carried by brides as a token of prosperity and peach wood is woven into jewellery as an amulet.
The story of the Rudraksha (Sanskrit for Shiva’s teardrops) is a Hindu folk tale of Shiva going into a deep meditative state, with his eyes shut for millennia. The meditation induced a state of supreme bliss, he cried elated tears that fell onto the Earth and manifested themselves as the seeds of the Rudraksha tree. Today, these particular seeds are made into a string of beads and worn like a necklace. They can be counted through the palm during contemplation and dangled over food to signal whether you should eat or not, depending on their rotation.
These are just a few brief examples of countless tales and ideas that have rippled through history and lured us with wonder. Just as a honey bee transports pollen from one flower to the next, ensuring the plants will come again, so our ancestors have transported stories for their offspring to reap and sow.