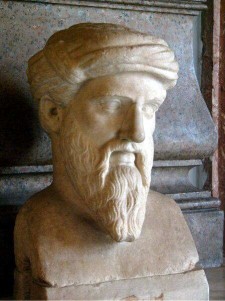 Although his exact origin is unknown, most authors, including Porphyry, agree that he was born and raised on the Ionian island of Samos, around 560 B.C.

His father, Mnesarchus, was a “ring engraver” of Tyrrhenian origin, who did business with the Greeks and Phoenicians. His mother, Parthenis, was a descendant of Ancaeus, the founder of Samos. According to Iamblichus, on one of Mnesarchus’ trips to Syria, he and Parthenis visited Delphi. The priestess of the oracle of Apollopredicted that the voyage would be profitable and that the son they were expecting would be beautiful, wise and of great service to mankind. From that moment on, Mnesarchus called his wife Pythais and when their son was born, he called him Pythagoras, which means “the altar of Pythia”.

He had 2 older brothers, Eunostus and Tirrhenus. His wife was Theano, a young woman from Croton who belonged to his school. They had a daughter, Damo, and a son, Telauges, who was said to have been the teacher of Empedocles.

When he was very young, his uncle Zoilus recommended him to Pherecydes the Syrian who became his first master of knowledge. Historians do not agree upon the origin of this important master, but the fact is that, regardless of whether he was from Ionia or Syria, he belonged to the Chaldean tradition which had originated in Babylonia and was dedicated to the mysteries of mathematics and astronomy.

Pythagoras remained with Pherecydes until his death and then began a series of journeys throughout Egypt. Polycrates recommended him to the Pharaoh, Ahmose, who co-ordinated his instruction by different high priests at different centres or “Houses of Life”, principally in Heliopolis and Memphis. There he learned the meaning of the hieroglyphics and the sacred science. During this period he also visited Mesopotamia, where he probably came into contact with the Magi who followed the doctrine of Zoroaster.

He also visited the cave of Mount Ida in Crete where Zeus grew up. There he received purification from the Dactyl priests. He came into contact with other great philosophers of the time such as Anaxagoras and Thales of Miletus.

When he returned to Samos, Pythagoras founded a school called “The Hemicycle of Pythagoras” where matters of philosophical and public interest were discussed. On the outskirts of the city, he used to meet with his closest disciples in a remote cave, where he communicated to them his most secret teachings.

The tyranny of Polycrates made him move to Croton, Italy, when he was 40 years old. His brilliant personality was at its peak, making him stand out amongst his peers in this city, where he was acclaimed by many as a counsellor and teacher. The influence of the philosopher continued to grow throughout the cities of Magna Graecia, for which he and his disciples, Charondas the Catanean and Zaleucus of Locri, drew up laws and constitutions.

Just as in the case of Pherecydes, predictions, premonitions and the reading of omens, that is to say prodigious events, were a constant in the life of this wise man, all of which increased his fame and prestige and at the same time fomented envy and animosity amongst his enemies. Cylon of Croton, a rich aristocrat of a despotic and violent nature, attempted to join the school of Pythagoras. When he was rejected by the philosopher, he plotted against him and his followers, setting the house of the athlete Milon, where they were all gathered together, on fire, and killing everyone except Archippus and Lysis, who were able to escape. Pythagoras, who wasn’t in Croton at the time, was forced to live a wandering life due to the unstable political situation that arose in other cities and the danger that this instability represented for him. Finally, he took refuge in the sanctuary of the Muses at Metapontum, where he died.

Thus began the diaspora of the Pythagorean disciples and their effort to reproduce in writing some of the teachings of the master, who apparently hadn’t written anything down. According to Diogenes Laertius, the results of these efforts were a number of treatises on Institutions, Politics, and Physics, along with others on the subject of the Soul, the Universe and Piety.

The invention of the term “philosopher” is attributed to the Ionian Master, when he referred to himself as “one who loves wisdom”, humbly rejecting the term “Sophos” or wise man. Philosophers belong to a special lineage: they are those who, in the festival of life, instead of worrying about glory and applause, or money and profit, devote their time to examining the nature of things.

Historians find similarities in his teachings with the Orphic religion and mysteries, because of their practical character which was aimed, according to Porphyry, at “preserving the mind and freeing it from certain obstacles and ties by means of a purification process. This would permit the contemplation of incorporeal eternal beings, skillfully leading the eyes of the soul towards the contemplation of authentic realities”.

His disciples were divided into two categories: the mathematikoi, completely dedicated to being philosophers and the akousmatikoi, who combined this dedication with their private and social occupations.

In his attempt to conceptualise eternal truths, Pythagoras resorted to mathematics, considering this sacred science the best method for conceiving and expressing the first principles, the unifying powers of the cosmos and concepts such as equality, dissimilarity and alterability (change). From this point of view, everything created adheres to numerical rules and proportions, which are synthesised in the Decad, the perfect number which contains all the rest. The numbers are therefore considered as fundamentals.

These ideas are reflected in the notion of Harmony, a vital concept for the Pythagorean movement. Harmony manifests itself throughout the universe, from the combination of the rhythms of the celestial bodies as they revolve in space, known as “the music of the spheres”, to that which purifies the soul aided by the art of music. Harmony is not only established at a physical level but also in the relationship between the cosmic and moral order, at the heart of the world soul.

Another of his teachings focused on the immortality of the soul and its transmigration from one body to another at different moments in time.

Friendship had a great value for Pythagoras and was considered an essential characteristic for living together, as exemplified in a well-known saying: “among friends, things are held in common”.

The ancient historians have cited on many occasions the practical aspect of his teachings, as well as his advice to live a well-balanced life in body and spirit. Among these recommendations, Pythagoras suggested meditation at the end of the day through responses to the following questions, “Where did I go? Where was I? and What did I do that I shouldn’t have?”

He also recommended exercising the memory and behaving in such a way that one’s friends do not become enemies, but rather that one’s enemies become friends. These and other rules were written down later under the name of “The Golden Verses”.

Plato refers to Pythagoreanism in “The Republic” as a way of life. As a matter of fact, many of his philosophical theories belong to the Pythagorean tradition, which came to the Academy through the work of Philolaus, who was the first to write down the Pythagorean treatises. The historians mention that Dion of Syracuse purchased them for Plato from the descendants of Philolaus for a high price. The dialogue “Timaeus” includes the doctrines that Plato found in these same treatises.