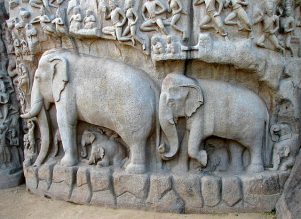 The elephant, in its most global and universal meaning, symbolizes strength and power, not only physical but also mental and spiritual.

In Hindu tradition, elephants call up the image of Ganesha, symbol of knowledge, son of Shiva and Parvati. His human body is the microcosm, manifestation, and his elephant’s head is the macrocosm, non-manifestation. He is the beginning and the end. During processions, elephants were ridden by kings and foremost by Indra, King of the Heavens, thus symbolizing royal power.

In the Far East, the elephant’s round and massive body as well as its whitish-grey colour lead to it being a representation of clouds. Hence the myth of the purported existence of winged elephants believed to constitute the cloudy skyline. In Siam, Laos and Cambodia, the white elephant grants rainfall and plentiful harvests. But when ridden by Indra, Lord of the Heavens, the elephant becomes the Storm-God.

The elephant also plays the role of the animal that holds up the world. Elephants are the “caryatids” of the universe. They possess in themselves the structure of the cosmos: their structure is composed of four pillars supporting the celestial sphere, symbol of stability and immutability.

Yoga associates the elephant to the chakra Mûlâdhâra, in turn associated with the element Earth and the mastery of the centre upon the four directions of terrestrial space. With respect to the Tree of Life, uniting Heaven and Earth, the elephant is found at the top, from where stems Light enlightening the world from the peak down to the valley. Its feet and its trunk, shaped like an “S”, are in contact with the ground while its two ears, on another symbolic plane, correspond to the two blades of the double-edged axe of ancient Cretans.

According to Buddhist teachings, Queen Maya conceived the Buddha from an elephant calf that caressed her body with its trunk while she was asleep. In this way, the elephant calf is seen as the instrument of Heaven’s action and blessing that will give birth to the Avatar.

Its strength allows whoever invokes the power of the elephant to realize his heart’s desires. When one wishes to begin an important endeavour, the elephant is invoked as God of Knowledge and destroyer of obstacles, under the appearance of Ganesha. It is also invoked at the beginning of Buddhist prayers.

When placed on top of a pillar, an elephant evokes the Light of Knowledge. Finally, the Boddhisattva rides an elephant as a display of the power of knowledge, which can awaken man to the consciousness of his own destiny.