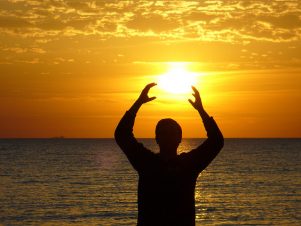 “All that exists was born from Surya, the God of Gods. Of what is and has been and is to be, and what moves or remains still – Surya alone is the source and the end.” -Rig Veda

Almost every ancient culture thought it important to somehow preserve, communicate and transmit mythology related to this supreme God from generation to generation. Amon in Egypt, Apollo in Greece, Surya in India, Amaterasu in Japan, Xihe in China, Mithra in Mesopotamia, Huitzilopochtli for the Aztec, Malakbel in Arabia, to mention a few. It was imperative for civilizations to pass on this wisdom that was received from ancestors to future generations; by doing so they became a link in a long chain that connected humanity to the eternal wisdom of the past, as well as the future. Today most of us look at mythology as mere stories of fantastic characters to entertain the young. Some of us dig a little deeper to unveil the morals and life lessons that lay waiting to be unraveled. Maybe we could dig even deeper and unveil some relevance to our role as human beings – in the current scenario of the 21st century. Perhaps even get a peek into the mysteries of the human being and the universe and some questions like: Who am I? Where do I come from? What is my purpose?The sun is the generator of all life on earth. Since the dawn of time, humanity has instinctively related to the sun as the fundamental source. It is a symbol of truth, of the Supreme Being that embodies justice and equality, wisdom and enlightenment, renewal and rebirth. Numerous religious rituals, social rites, festivals and traditions we see today can be traced back to the ancient worship of the Sun. Many ancient monuments like the pyramids in Egypt, the Stonehenge in England, Angkor Wat in Cambodia, Konark in India offer us a glimpse of the connection that these civilizations had with the Sun and the celestial beings. As in nature, the symbolism of the sun is omnipresent in all aspects of life – whether be it art, architecture, sport, literature, dance, music, folklore, philosophy, religion or festivals.

For Australian aborigines, Gnowee, a solar goddess was once a woman who lived upon the earth at a time when it was eternally dark, and people could only move about with the aid of bark torches. One day she left her little boy sleeping while she went out to dig for yams. Gnowee wandered so far that she reached the end of the earth, passed under itand emerged on the other side. Not knowing where she was, she could not find her little boy anywhere, so she climbed into the sky with her great bark torch to get a clearer view. She still wanders the sky to this day, everyday, lighting the whole world with her torch as she continues to search for her lost son.

The theme of the voyage of the sun appears in various myths across civilizations. The Sun’s circular, cyclical journey from east to west, day after day symbolized cycles of life and death through light and darkness, wakefulness and sleep, of consciousness and unconsciousness. Its seemingly repetitive action brings to the world a new dawn every day. Each time with higher consciousness, with new learnings experienced with each passing day. A new opportunity to be awakened from sleep. Another opportunity to lead a life of higher consciousness. We can also see these cycles as generosity and compassion of the Universe – patiently giving all beings opportunities again and again to learn, to grow, to walk forward – one small step at a time.

Ancient Egyptians attentively watched the Sun’s daily round, which they represented in the form of Kephri – a scarab beetle carrying a resplendent solar disk – indicating the potential of a human being, traversing cycles of life and death with the inspiration of the sun as the supreme example of rebirth. The scarab, or dung beetle, is very much connected to the earth but with persistence and consistency, it achieves its potential eventually – literally sprouting wings, flying off towards the celestial and becoming one with the divine. Like the famous sentence attributed to Plato, “Man you are God, but you forgot.” It’s the duty of a human being to go through this ‘death’ of identifying with the temporary aspects of himself, the body and personality, and be ‘reborn’, by discovering and identifying with his higher aspects…to uncover the eternal soul that is truly us, and then live life in accordance to that wisdom.

During the Roman Empire, this voyage of the sun was more than just the beginning and an end of a journey. The festival of Sol Invictus, the victory of the Unconquered Sun was celebrated on the winter solstice – the “rebirth” of the sun after the darkest night of the year.

We see that ancient Egyptians paid homage to the sun by burying their dead with heads towards the west – where the sun ‘dies’ each evening, implying that they saw the sun being ‘reborn’ every morning.

Similarly, they didn’t see the physical death of a human being as the final destination of his journey but just another station on his long voyage called life. Sun-related rituals were also performed in order to ‘encourage and assist’ the sun when it seemed to ‘hesitate and waver’ at the turn of the seasons (solstices) and to quell the fear that it might be extinguished during an eclipse. The Ojibwe tribe in North America and the Sencis from Eastern Peru shoot burning arrows at the Sun in order to rekindle its darkening orb during an eclipse, and another tribe in North America erects and dances around a central pole symbolizing the sun’s power. In some agricultural communities in south east Asia, the Cadak ceremony is still performed, in which a man hooked to a tall pole swings around it as an act of magic in order to help the Sun move from its position in the constellation of Sagittarius to the constellation of Capricorn. In French villages in the Thur and Thann valleys, nine feet tall towers of fire are built in order to provide the sun with sufficient energy, enabling it to resume its journey around the earth during the critical periods before changing its direction from the longest night of December 21st, to the shortest on June 21st. A ‘helping hand’ during midsummer’s day is similarly extended in the Baltics by ceremonially jumping over the fires.

These, and numerous other customs, maybe considered primitive traditions of simple folk, or they might offer an understanding that these civilizations had about the role of man in the larger scheme of things; the recognition that without the help and effort of humanity, of each individual, even the sun, the great giver of life, will not be able to express its duty to the fullest. Let us allow the mythology and symbolism of the Sun to inspire us to know ourselves, to know our role as individuals and as humanity.