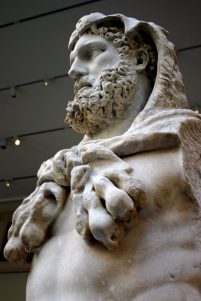 During these days of sunlight’s fullness, it is good to remember the symbolism of the sun and its connection to our inner centre, our Higher Self. This connection appears most frequently in the stories of solar heroes.

Etymologically the word ‘hero’ comes from the ancient Greek ἥρως (hērōs), which means ‘protector’ or ‘defender’. So, it is about someone who feels and bears a responsibility for others. That ability to protect and care, to bring harmony and peace is not given a priori, it arises through the challenges and trials that a hero necessarily encounters on his path.

Solar symbolism is connected to the hero’s powers and the cycle he undergoes, like the sun as we perceive it from the Earth: birth, growth and maturity, descent into the underworld, rebirth. The hero’s cycle may be divided into different stages, starting with his unrealised potential, going through trials and finally attaining full accomplishment.

In mythology, a solar hero usually connects Earth and Heaven – the ordinary and spiritual dimensions. This is either due to his birth from a mortal man or woman and a god or goddess, as in the case of Heracles, or to his being a divine heir to the earthly realm like Horus, who restored justice and ruled after his father Osiris. This means that from the moment of their birth there is a potential carried within a hero-to-be, which grows into a call for adventures later in life. And the hero’s journey starts when he responds to that call.

Then come the trials. First a hero has to conquer himself. All the mythological destructive forces he is overcoming are the personifications of his inner enemies – impurities, weaknesses and vices. This process is well described in the Labours of Heracles, where he meets different creatures like the Nemean Lion or the Hydra of Lerna and undergoes a process of purification – the Augean Stables. Step by step a hero rediscovers his true heavenly and thus spiritual nature. Then comes the last and hardest trial symbolising death in which all the transient perishes leaving only the eternal – and the hero accomplishes his journey: Theseus goes through the underworld (Tartarus) and Heracles fights Cerberus, the many-eyed dog that guards the underworld.

When the journey is completed and all trials overcome, a hero transcends this world. He may acquire immortality like Heracles and join his heavenly father, or he may wait to return from the dead to save the people under his protection, as in the case of King Arthur and other ‘sleeping kings’.