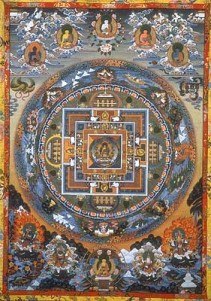 A traditional Japanese story speaks of a disciple who once asked his master how one could achieve enlightenment. The master suggested in a matter of fact manner, that he must do exactly the same thing he did every morning for the sun to rise. After much pondering, the confused disciple went back to his master to confess that in reality he did not do anything to help the sun to rise every day…and that since that is so, he could not understand the reason to study calligraphy, karate, kendo, archery, floral arrangements, and the art of bonsai. With a gentle smile, the master replied, “Precisely so that when the sun rises, you find yourself truly with your eyes wide open.”

Many traditions, from both East and West, suggest that even though we look at reality around us, we do not see the essential. We look, but we do not observe and therefore get caught within the superficial layers of life, unable to view what lies right in front of our eyes, the most fundamental laws that govern Nature and ourselves.

Newton’s sudden realization of the Universal Law of Gravity is one well-known example of the ability to grasp, within one moment, what was always in front of his eyes, as well as those of so many before him. Although apples have obeyed the same laws causing them to fall on peoples’ heads even before him, Newton was able to capture this idea and give it a form and definition.

If we cannot really grasp the laws even of the tangible reality, imagine how little we grasp of the intangible planes, known in Sanskrit as the arupa. So what do we need to do? We need to develop better spectacles that will allow us to see better. Maybe, like in the above short story all we need to do is to open our eyes to the inner nature of things, and keep them wide open as life happens in front of us.

The art of making mandalas was, and still is, practiced as a means by which to improve the ability to grasp. Through its geometrical structure it can teach the artist, as well as the observer, about the nature of the cosmos and the laws that govern it.

The word mandala originates from Sanskrit and is often translated as ‘a circle’. But it is far more than just a simple shape. It represents wholeness, and can be seen as a model for the organization of life itself; a cosmic diagram that serves to remind us of our relationship with the infinite, the world that extends both beyond and within our bodies and minds.

In its most common and simplest form, the mandala appears as a central point (the centre) surrounded by a square structure with four elaborate gates (sometimes described as a four-sided palace or temple) enclosed within an outer circle (the circumference).

Many of you reading this article might say that there are many more elements in a mandala. Although true, for this article I would like to keep it basic and simple.

It is said that a mandala is born through the creation of its central point. This point emerges out of nothing but once it appears, it starts to move, to grow, to evolve.

A point has no dimension, yet embraces all dimensions. It transcends the illusions of time and space and therefore results in the here and now, our most primal light of consciousness. This point is The Absolute, the source from which all creation manifests It is all. And at the same time it is also nothing. Pythagoras, the numerical and musical Greek master would have called it Zero, the origin that contains all other numbers.

If our essence is truly spiritual, then perhaps this point is the oneness we all share, validating that each individual is equally precious and a sacred aspect of same One.

Mandalas tell us that Life originates from Unity.

The Absolute starts to expand and emanate. The dimensions, the many regions of nature emerge. These dimensions are described as parallel worlds, which coexist without mixing.
They are the four elements of life, the four building blocks: Earth, Water, Air and Fire. Within a human being, the four gates express as the four aspects that build our personalities: the gross matter (our body), the energy (life force), the astral plane (our emotions) and the subjective mental aspect (our thoughts).

Mandalas teach us that we have four tools, four gates, given to us to explore the world and ourselves.

Expansion outwards continues symmetrically in all 6 directions of space simultaneously to create a sphere, a circle. This sphere stands for the multiplicity of points and options.

The sphere is considered the most perfect of all forms. On a sphere, there is no point of view given greater or lesser importance, and every point on the surface is equally accessible and is regarded by the center from which everything originates. The sphere symbolizes the multiple combinations of the building blocks of life, its infinite variety of forms.

If we think about it, the human population has crossed 7 billion people. It is a huge number and yet not one man is identical to another. Even identical twins might look similar on the surface, but their personalities can be very different.

In addition, beside the human kingdom, how many types of minerals, plants and animals exist on Earth? And beyond Earth, it is estimated that there are 200 billion suns in the Milky Way alone. And this is just a small part of the universe which some say contain 100-200 billion such galaxies!

Mandalas tell us that life has an infinite number of forms, life is complex.

To summarize life originates from oneness (unity) which expands and reveals the four basic elements, four doors that open to the wealth of shapes and forms that we can see within us and around us. Hence, Life moves constantly from unity to plurality, from simplicity to complexity.

This force that expands outwards is known in physics as the Centrifugal Force and it describes the tendency of an object following a curved path to move outwards, away from the center of the curve.

It is interesting to note that this outward movement is not really considered a force; it results from inertia, the tendency of an object to resist any change in its state of rest or motion.

So we can say that in the absence of effort, the tendency of everything which is alive is to scatter, to move away from the center. To take another well-known example, consider that it is easier to exhale than it is to inhale…however, can we still remain alive if we only continuously exhaled? Don’t we need to complete the cycle by breathing in and allowing fresh air to nourish our blood?

Physics recognizes another force called Centripetal Force (which translates from Latin to towards the centre). This is a real force that counters the centrifugal force preventing objects moving along a curved path from “flying out”. To initiate that movement we need to put an effort to overcome the tendency of inertia, of scattering, by using the ability of concentration.

Shift from multiplicity and separation to the realization of unity and simplicity.

SUMMARY
Mandalas reveal the mysteries of life to those who know to observe with open eyes. By giving in to the tendency of inertia, we will live a scattered life. Like a rat in a race, we will run after all the needs and demands of life, chasing some unknown goal, running around the circumference, that grows more and more every day. Sadly, one day we will find ourselves mourning the wasted time that passed away so quickly.

Consider instead using another force, that goes inward, and invites us to ask the simplest questions: “Who am I?”, “Why am I here?”, “What is my role in the world?” In the midst of all the noise, making this effort to re-unite with the center, the beginning and the end of all life, might be the purpose of it all.

Roman emperor and Stoic philosopher Marcus Aurelius said, “Learn to live every day like it is the last day of your life”. On the last day of our life, we should not be chasing anything; we might just want to be as alive as we can. But why wait for the last day? It might be too late. Imagine instead striving to do it every day: to give the best of who we are, always remembering what life is all about – unity that expresses itself in multiplicity.

How will our world, and humanity, look like then? Is it just a far and naïve dream? Or maybe it can start with each one of us, not tomorrow but today. A mandala is an invitation to remember. Therefore, print one and hang it in front of your eyes. Make it the first thing that you see before you start the day and allow it to serve as a reminder.