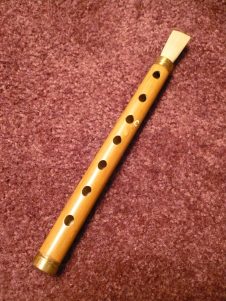 The flute as an instrument is perhaps as old as any civilization. It has been used in music both for ritualistic and entertainment purposes in ancient Egypt, Greece, the Hindu culture and in Sufism.

The reed flute (called ney) is one of the main instruments in Sufism. It has been played for 4500-5000 years and is now popular in the Middle East.  Although there are different types of ney, in Sufism the ney has 7 holes and symbolised the human being. It is used in rituals as it is believed that the sound of the ney helps to attain the consciousness of God. Rumi, the great poet of Persia, often speaks about the ney and his great work Masnavi opens with the words “listen to the ney”. He says the pains and sorrows the soul experiences through life are like holes made in a reed flute, and it is by making these holes that a player makes the flute out of a reed. This means that the heart of man is first a reed and the sufferings and pains it goes through make it a flute which can then be used by God as the instrument for the music that He constantly wishes to produce. It was on the model of the heart of man that the first musical instrument was made, and no earthly instrument can produce that music which the heart produces, raising the mortal soul to immortality.