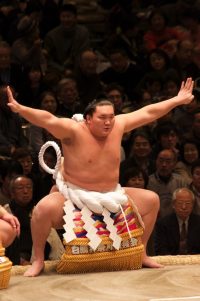 Sumo is a form of wrestling that expresses the Japanese Shinto religion. It has at its heart principles of dignity and courtesy, and as well as being Japan’s national sport it is also a religious ritual. The Sumo wrestlers, called Rikishi, may look big and cumbersome but winning fights involves a combination of strength, agility, speed, craft, technical skill and flair. Many Sumo are actually excellent dancers! To train to become a successful Sumo wrestler involves huge personal sacrifice, with young hopefuls joining a stable (heya) at age 15/16 and living and sleeping there, training 7 days a week and carrying out all tasks involved in running the stable, including the cooking, cleaning and shopping until they begin to rise up the ranks.

The first recorded Sumo fight (bout) was around 23 BC and initially existed mainly in popular Shinto shrines as a way of making contact between man and spirit. It gradually became more competitive in the Middle Ages during the age of the Samurai and became a form of hand-to-hand combat to decide which of the two fighters should have the blessing of the Gods.

There are 6 tournaments (basho) a year. The ring in which the bouts take place is called a Dohyo. It is an 18ft square slab of clay edged by 32 rice straw bales, raised 30 inches above the stadium floor with a 15ft diameter ring in the centre marked out by 20 more rice bales. Building it takes 3 days, supervised by a Shinto priest and ending in an opening ceremony the day before the tournament. Here three referees dressed in white consecrate 4 wooden sticks representing the 4 seasons with the words ‘Long life to earth and may wind and rain faithfully follow’. An earthenware pot filled with good luck charms such as dried chestnuts, seaweed and cuttlefish is buried in the centre of the ring with offerings of salt and sake. Hanging above the Dohyo is the wooden roof of a Shinto shrine from which silk tassels hang from each corner in the colours of the 4 seasons: green to represent Spring hangs in the east; red, representing Summer hangs in the south; Autumn is represented by a white tassel in the west, and Winter is represented in the North by a black tassel. The rice straw circle represents the ritual of harvest and contains the ring itself which is ‘the realm of the absolute’. It is regarded as sacred ground.

The colours and directions of the tassels are based on the I Ching and together with the inner ring represent the Five Constants (benevolence, justice, ceremony/behaviour, knowledge, integrity) and Five Virtues (piety, justice, altruism, loyalty, ceremony) of Confucianism. Each bout lasts on average just 10 seconds but is preceded by an extensive round of rituals performed by both wrestlers including throwing salt to purify proceedings, stamping to drive out evil spirits, clapping to attract the attention of the gods, turning palms up to show they are unarmed, ritually rinsing their mouths with water and cleansing their bodies with paper, then more salt-throwing and more stamping, and then when satisfied both wrestlers will crouch down on their marks to glare at each other. This part is called Shikiri Naoshi and can last for up to 4 minutes – before TV this had no time limit! Shikiri Naoshi is a kind of ritualized aggression involving prolonged eye contact and threatening postures designed to undermine an opponent’s self-confidence and boost one’s own. Many Sumo experts can tell from this who is more likely to win.

Then comes the moment of truth, the tachi-ai. Both wrestlers must touch the clay with both hands before they charge and must stand up together, simultaneously, for a clean, harmonious start. The wrestlers can prolong this point, crouching, standing, resettling, creating tension until the point at which they are both ready. They both touch the clay with both hands and leap out at exactly the same time, meeting at the exact mid-point in between themselves with a huge force, said to be up to 1 tonne of force. This is the first and often most important move – how they meet each other. From here the rest of the bout can be won or lost.