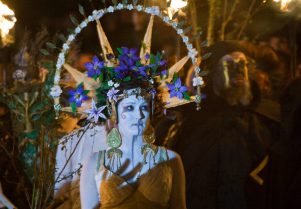 “There is an earthly sun, which is the cause of all heat, and all who are able to see may see the sun, and those who are blind and cannot see him may feel his heat. There is an eternal sun, which is the source of all wisdom, and those whose spiritual senses have awakened to life will see that sun, and be conscious of his existence; but those who have not attained full spiritual consciousness may nevertheless perceive his power by an inner faculty, which is called Intuition.” This quotation from Paracelsus indicates what many cultures had already known about the Sun, that it is not just a centre because of its position, but also because of its vital and spiritual power.

The Celts were one of those cultures that recognised the importance of the Sun. They had many deities with solar attributes and celebrations marking the significant times of the Sun cycle. At the Beltane Festival (Beltane means “bright fire”, referring to the Sun) the return of the summer is still celebrated today. Great bonfires, sometimes with sweet smelling Juniper, are built to achieve purification and rejuvenation. The Beltane festival is said to have been related with Belenus, called the “Fair Shining One” (or “The Shining God”), who was one of the most ancient and most widely worshiped Celtic deities. He is associated with the horse and rides across the sky in a wild, horse-drawn chariot which is one of the characteristics of a solar deity. Incidentally, he was also the patron deity of the Italian city of Aquileia.

Another well-known sun god of the Celts is Lugh, whose name means “shining one” or “flashing light”. His name is the origin of the Pagan festival “Lughnasadh” (which is also the Irish Gaelic name for the month of August). He was the patron god of Lugdunum (currently Lyon, France) and was associated with multiple skills and industries including arts and crafts, commerce, history, healing, war and blacksmiths. Among his symbols were ravens and specifically a white stag in Wales. He is represented as a king, a leader of the army but also a powerful god who brings light into the world.

The Sun has also had many female representations. In Irish Gaelic, the word for the sun is Grian. Although no myths remain about Grian, she is found in place names like Lough Graney and Tuamgraney. She is the winter sun and her sister or her dual nature, Áine, is the summer sun. Áine is the goddess of wealth, with power over crops and animals and she is sometimes represented by a red horse.

Étaín is another Celtic goddess considered to be associated with the Sun. She was originally a Sun goddess before becoming a moon goddess. She is the heroine of well known story in Celtic mythology, Tochmarc Étaíne (The Wooing of Étaín). Through being faithful to love and to her true self, she was reborn and became immortal again. Elements sacred to Étaín are the sun, dawn, the sea, rain, water, butterflies, apple blossoms, and swans. She is the goddess of healing, rebirth and the transmigration of souls.

The “triple goddess” Brigid has dominion over the early spring equinox, light and fire. She is remembered for her solar nature, fitting her role as a goddess of fire and light. Brigid was also known by many other names, but all the different divinities were three-aspected goddesses: “Fire of Inspiration”, “Fire of the Hearth” and “Fire of the Forge”.

The sun is the source of all life on Earth and we can find the various aspects of this source of life represented in all these Celtic deities embodying will, wisdom, life-giving renewal and healing energy.