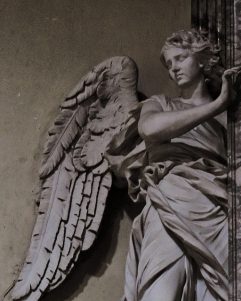 Angels are regarded as invisible messengers, inhabitants of Heaven, beings of light and symbols of lightness as well as fire and martial power. Angels have always been present in the imagination of man. All civilizations admit the existence of these beneficent spiritual beings that collaborate with the Creator, according to their rank in the celestial hierarchy. Intermediaries between God and the world, sometimes endowed with an ethereal body, angels symbolize the divine functions as well as the relationship between God and its creatures. Terrestrial hierarchies are the reflection of celestial ones. Angels are also the heralds of the sacred presence. They accompany us and help us if necessary. The Judeo-Christian tradition gives some names of angels like, for example, those of the three major archangels: Michael, dragon slayer; Gabriel, messenger and initiator; and Raphael, protector of physicians and travellers. In ancient India, the Universe is seen as a hierarchy of active powers, angelical and demoniacal, divine and heroic. This universe has seven planes (lokas) that go from the invisible origin to the visible manifestation. It is inhabited by myriads of gods, angels, demons which, together, try to serve “Dharma”, the Great universal Law, through “Karma”, the law of action and reaction, the two basic laws of oriental culture. In Greece, Plato tells us about ” daimones ” (demons) through Socrates who declares that in each good man resides one of these ” protective spirits “, which is to be found between the mortal and the immortal, between the human and the divine, between the tangible and the intelligible, which likes truth and drives man towards goodness, beauty and happiness. Thus, each human being has, according to all traditions, a guardian angel (or three according to C. Agrippa, who attributes a guardian angel to each plane of the human personality: mental, emotional and physical). This angel protects the human being he is in charge of, in order to make him progress towards his own spiritual fulfilment. All religions assert that God never abandoned human beings and that He wanted to give each of us a guardian angel so that we can hear its voice whispering to us mysterious words or giving us imperative orders, to awaken our conscience. According to legend, angels, prompt winged messengers of Heaven, are always bearers of good tidings for human beings.