The Symbolism of Wings 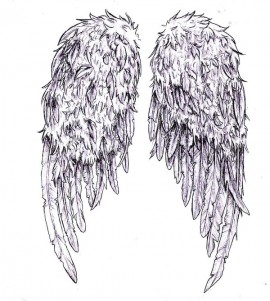 According to Hindus, wings are the expression of the freedom to leave earthly things behind as a result of contemplation and to reach Paradise. The Rig Veda sees wings as Intelligence, swifter than any bird. The Universal Architect creates the world with the movement of his winged arms.

In ancient Egypt, winged gods were protective gods. They protected creatures, covering them with their wings, as well as surrounding walls, enclosures and temples which doors were adorned with a winged image of Amon-R‚. The union of Butho, the snake, and Nekhbet, the vulture, representing respectively Lower and Upper Egypt, will give birth to a winged snake (similar to Quetzalcoatl, the well known Plumed Serpent of the Aztecs), symbolizing the union of Earth and Heaven.

In pre-Columbian cultures, wings are associated with the Sun, adopting the form of an eagle in Mexico, and the form of a condor in Peru. These solar birds are the symbol of the sky up to where they can rise thanks to their powerful wings. The bird represents regeneration, the work realized on Earth, that allows flight from one world to another, superior world; this reminds us of the Egyptian scarab that, after crawling on the ground, spread its wings at the end of its life cycle to rise in the sky up to the Sun. The humming bird represents the rising sun as well as the soul that rises from earth to heaven.

In Christian tradition, wings are associated with the light of the Sun of Justice that illuminates the Intelligence of the Just. God protects man with the shadow of his wings (Psalm). When man separates himself from God, he loses his own original wings. Angels are the purest expression of winged spirit.

In Greece, Hermes had winged heels, symbol of the traveller and the messenger, of dreams, of impulse, of movement. The Greeks represented Love and Victory with wings. According to Plato, wings represent Intelligence and Understanding. That is the reason why they are associated with certain fabulous animals, such as Pegasus, representing the sublimation of the specific symbolism of the animal.