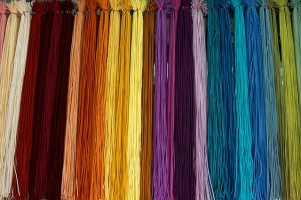 The symbolism of thread is essentially that of the relation existing between all states of being and between the latter and their First Cause. This symbolism is clearly expressed in the Upanishads where thread links this world to the other world and to all beings. This thread is both Âtma and Prâna. Because it is linked to the main centre, thread must, in all things, be followed back to its source. This reminds us of Ariadne’s thread that not only was the link between the outside world and the centre of the labyrinth but also the link allowing to go from the realm of darkness to the realm of light.   On the cosmic plane, a distinction should be made between the threads of the warp and the threads of the woof: the warp connects worlds and states of being; the woof represents the prescribed and temporal development of each state and of each world. The unwinding of the single woof thread symbolizes the fatal Sisters weaving time or fate.  Taoists often associate thread with the backward and forward motion of the shuttle across the loom: life and death, evolution and involution of manifestation.  The Rig-Veda sees weaving as the symbol of the rhythm of life and its endless alternation.   Thread is one of the meanings of the word sûtra denoting the Buddhist scriptures. The word tantra is also derived from the notions of thread and weaving that is to say the interdependence of things, of cause and effect and of traditional continuity.   Throughout the Mediterranean Basin, spinning and weaving are associated with the participation of the woman in the work of creation.