The Symbolism of the Eagle 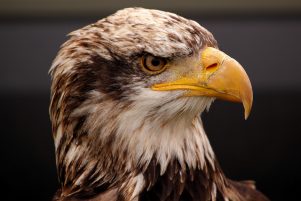 The eagle is one of the most ancient symbols of humanity. The Greeks and the Persians consecrated it to the sun, as a symbol of elevation and of spirit associated with the supreme sky-god, representing the spiritual principle. For the Greeks, the Eagle was the emblem of Zeus. The Druids regarded it as the symbol of the Almighty who watches from higher spiritual states.

The Eagle is a diurnal bird whose life is associated with light and with the elements Fire and Water. The Eagle is characterized by its fearless flight, its swiftness and its familiarity with thunder and lightning, attributes of creator gods. The Eagle also represents hereditary nobility, power and war. Like the lion on earth, the Eagle is the king of the sky. As an initiatic bird, it flies from one world to the other and regenerates and guides souls.

Since prehistoric times, it is a collective symbol of strength and power. Transmitted to the Christians at the time of the Crusades, it is incorporated into the coat of arms of European kings and emperors. The two-headed eagle is a strengthening of the symbol and a duplication of its powers.

In the Bible, the Eagle is associated with St John the Evangelist because of his direct perception of the inspiring light of the Intellect.

In old India, it is Garuda, a big mythical bird, a solar bird, mentioned in the Ramayana as Vishnu’s steed, Vishnu being the Second Person of the Indian trinity composed of Brahmâ, Vishnu and Shiva.

In Rome, the Eagle roosts on Jupiter’s sceptre and makes his will known to human beings. On coins, it appears as the emblematic symbol of the legions and the power of the Empire.

In Persia (Iran), it symbolizes the victory of the Persians over the Medes, of which it had been an omen by flying over the battlefield.

In Mexico, the Eagle is an old god of vegetation, associated with the jaguar, symbol of the telluric forces, of the darkness of matter, while the bird-god represents the sky and light, the celestial spirit. It gives its strength to the Eagle Warriors, the elite of the Aztec warriors. The Aztec emperor dressed with eagle’s feathers that also adorned his ceremonial throne.

Read the original article on http://www.acropolis.org/en/resources/symbols/398-eagle