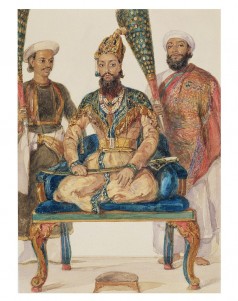 “In ancient times there existed in the country of Serendippo, in the Far East, a great and powerful king by the name of Giaffer. He had three sons who were very dear to him. And being a good father and very concerned about their education, he decided that he had to leave them endowed not only with great power, but also with all kinds of virtues of which princes are particularly in need.”

So begins the fascinating story of The Three Princes of Serendip. In order to provide the best tutors for his sons, the king travels throughout the island until he finds a number of scholars, each specialized in a different field, “And to them he entrusted the training of his sons, with the understanding that the best they could do for him was to teach them in such a way that they could be immediately recognized as his very own.”

As the three princes are endowed with great intelligence, they soon become highly trained in the arts and sciences. However, when the tutors inform the king of his sons’ achievements, he is sceptical. So he summons his eldest son and announces that he wishes to retire to a monastery and that his son should succeed him as ruler. The eldest son politely refuses, insisting that his father is wiser and should reign until his death. The two younger sons also refuse when commanded in a similar manner.

Although the king is astonished by the wisdom displayed by his sons, he decides to send them on a prolonged journey so that they can acquire empirical experience. He summons his sons and, giving the impression of being angry and disappointed because they have all disobeyed him, banishes them from Serendip. “Thus they started their peregrination and moved out of his kingdom until they reached the kingdom of a great and powerful emperor, whose name was Beramo.”

Misfortune befalls the princes when a camel driver stops them on the road and asks them if they have seen one of his camels. Although they have not, they have noticed signs that suggest a camel has passed along the road. Ever ready to dazzle with their wit and sagacity, the princes mystify the camel driver by asking him if the lost camel is blind in one eye, missing a tooth and lame. The camel driver, impressed by the accuracy of the description, immediately hurries off in pursuit of the animal.

After a fruitless search, and feeling deceived, he returns to the princes, who reassure him by supplying further information. The camel, they say, carried a load of butter on one side and honey on the other, and was ridden by a pregnant woman. Concluding that the princes have stolen the camel, the driver has them imprisoned. It is only after the driver’s neighbour finds the camel that they are released.

The princes are brought before Emperor Beramo, who asks them how they could give such an accurate description of a camel they had never seen. It is clear from the princes’ reply that they had brilliantly interpreted the scant evidence observed along the road.

As the grass had been eaten on one side of the road where it was less verdant, the princes deduced that the camel was blind to the other side. Because there were lumps of chewed grass on the road the size of a camel’s tooth, presumably they had fallen through the gap left by a missing tooth. The tracks showed the prints of only three feet, the fourth being dragged, indicating that the animal was lame. That butter was carried on one side of the camel and honey on the other was clear because ants had been attracted to melted butter on one side of the road and flies to spilled honey on the other.

The deduction regarding the pregnant rider is more complicated than the rest and is somewhat lewd, so I shall let the princes tell it themselves: “I guessed that the camel must have carried a woman,” said the second brother, “because I had noticed that near the tracks where the animal had knelt down the imprint of a foot was visible. Because some urine was near by, I wet my fingers (in it) and as a reaction to its odour I felt a sort of carnal concupiscence, which convinced me that the imprint was of a woman’s foot.”

“I guessed that the same woman must have been pregnant,” said the third, “because I had noticed nearby handprints which were indicative that the woman, being pregnant, had helped herself up with her hands while urinating.”

Emperor Beramo is so astounded by the princes’ sagacity in the matter of the missing camel that he invites them to be his guests. He is soon convinced that they are blessed with the powers of prophecy when they divine that one of his counsellors is planning to poison him. Their remarkable abilities prompt him to tell them a strange story. He relates how there was once a Mirror of Justice in his realm that revealed the guilty, so ensuring peace and tranquility. However, the mirror was stolen and taken to another land, where it came into the possession of a Virgin Queen. Beramo urges the princes to retrieve the mirror so that justice can be restored.

Their task is complicated by a giant upright hand that has appeared upon the sea near the queen’s capital and is terrorizing the inhabitants. The decision is made to bring the mirror to the shore and orient it towards the hand. As a result, the hand starts to clutch at animals rather than humans. Understandably, the queen is reluctant to part with the mirror, as it now prevents any further human loss. The daunting challenge for the princes is to subdue the hand once and for all.

The princes arrive at the queen’s capital and proceed to the beach to confront the hand. The eldest realizes that it is a symbol illustrating that if five men unite for a single purpose, they can conquer the world. So he holds up his hand with only the second and third fingers erect, demonstrating that it is an error to believe that five united men are necessary, when only two would suffice. The giant hand disappears forever beneath the sea and the queen gracefully surrenders the mirror.

When the princes return the Mirror of Justice to Beramo, they learn of the catastrophe that has befallen the emperor in their absence. Beramo has fallen in love with a beautiful slave girl called Diliramma, who one day questioned his honour in public. In a fit of rage, he had her bound and abandoned in a forest. The next day, Beramo was filled with remorse and ordered a search for his paramour. No trace of her was found, leaving Beramo ill with sorrow.

Witnessing the emperor’s suffering, the princes advise him to build seven beautiful palaces and to reside in each one for a week. In addition, the best storyteller in each of the seven most important cities of the empire is to be brought into his royal presence to recount a marvellous story.

Over the weeks, in his various palaces, Beramo listens with appreciation to six of the stories, his health steadily improving. While listening to the seventh story, about a ruler who spurns his lover, Beramo suddenly realizes that it concerns Diliramma and himself. On being questioned, the storyteller reveals that he knows Diliramma and that he is searching for her lord to tell him that she still loves him despite his act of cruelty. Overjoyed, Beramo sends for Diliramma and they are reunited.

Beramo asks the three princes how they conceived such an effective remedy. They tell him they recommended seven different palaces to be built so that variety might cure the root of his illness, insomnia. As no trace of Diliramma had been found in the forest, they refused to believe that wild animals had eaten her. Therefore they suggested that storytellers be summoned from afar in case news of her might be received. As Diliramma had been discovered in the forest by a travelling merchant, who took her far away, their strategy turned out to be precisely correct.

The princes return to Serendip, and the story ends with the three wise sons of King Giaffer becoming three wise rulers. Upon Giaffer’s death, the eldest son succeeds his father as King of Serendip. The middle son returns to the land of the Virgin Queen, marries her and becomes king. Emperor Beramo, who has a daughter, sends for the youngest son and offers her in marriage. Soon after the wedding, Beramo dies, and his son-in-law becomes lord of his empire.