The Symbolism of Chess 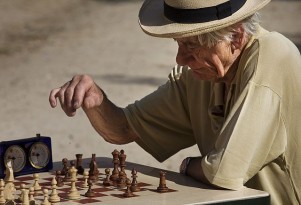 Though the origin of the game of chess is still unknown and mysterious, it is quite certain that it originated in the East, though it is the West that became infatuated with it. We also know that, in its beginnings, the game of chess was part of the strategy of war and was therefore applied to the Kshatriya (warrior caste).

The black and white pieces symbolized darkness and light, the war between the Titans and the Gods or the Asuras and the Devas. The checkerboard represents the visible world under the rule of black and white or yin-yang duality. It comprises 64 squares, sixty-four being the number of the realization of cosmic unity. There are 64 hexagrams in the I Ching, the Chinese Book of Changes compiled by Confucius. The 8 Trigrams with their 8 combinations represent the 64 changes or states of transition. These are in a process of continuous transformation with the modification of one of the 3 lines of the Trigrams. This represents life: permanent and changing. “Nothing is static” says Hermes Trismegistus in the Emerald Tablet which, with its 7 principles, synthesizes the entire wisdom of ancient Egypt. The checkerboard symbolizes both the space where the cosmic forces operate and the human inner space where man fights against himself, in other words, it is the Kurukshetra of the Indian Mahabharata. The game of chess is based on intelligence and concentration. That is the reason why it is easier to learn the logic and the practice of the game directly on the checkerboard rather than in a “handbook of strategy”. According to professor Klaus, dean of Philosophy at Humboldt University, “man learns better playing than listening to abstract lessons” That explains the impact of the “king of games”: it teaches through practice, for it combines, at the same time, self-control, control of the mind and analytical discipline by progressively developing the practice of logic. A kind of dialogue, partly scientific and partly magic, analytical and, at the same time, intuitive, eloquent and silent, takes place in this kind of mental duel that is the game of chess.