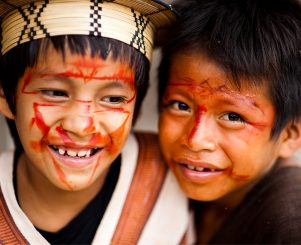 Modern-day living seems to center around finding as much comfort in life as possible and aspiring for some growth, usually material. As a result, we are facing the great challenge of seeing our planet’s resources declining, and a general concern about our survival on earth. The fact that ecological activism is on the rise is encouraging, but also underlines that something very wrong is happening and needs to be rectified. Though, we recognize the need to be more aligned to nature, our lifestyles are not in accord with this idea. Probably, for many of us, what it means to live in harmony with nature has become a foreign concept.

In the past, many ancient civilizations and tribes around the world were able to embrace a lifestyle more in harmony with nature and marked with a deep understanding and respect for their environment.  The anthropological work of Gerald Weiss, and his research on a particular tribe, the Ashaninkas, also called Campas, who live in the Amazonian region, has cast light on some age-old principles that helped them to live in symbiosis with this difficult environment.

This article extensively refers to his work, Campa Cosmology – The World of a Forest tribe in South America. Weiss traveled to the region in the 60s and collected information on their way of life going back to the 1920s. Could the lifestyle of what some might call a ‘primitive’ culture be applicable to us living our twenty first century ‘smart’ lifestyles?

Perhaps by investigating their beliefs and practices, we too could be taking one step forward in recognizing that man is not separate from his environment but is part of a deeply connected web of life.

In those times, the Ashaninkas lived in nomadic settlements, moving depending on the resources available. Thus, their lives were intimately intertwined with the earth’s natural cycles. They had to follow and depend on the seasons, day and night, even cycles related to the moon. This knowledge was primordial to their survival: learning to perceive the right time and place to fish, where to find fruits in which season, learning to respect and read nature. In contrast, today we can say that many of us have no idea where our food is coming from.

This knowledge was respected and transmitted through the generations, to the members of the tribe. Their connection with nature was so direct and strong that they revered the actual natural elements without giving it a material base or a different form. They had no idols to worship, no representation of any god or spirits. According to anthropological research, the sun, the moon and the fire were the main elements worshipped by them. They recognized that their lives are highly dependent on these elements and so it is to them that they dedicated their ceremonies. Those who have assisted in these rituals say that they believe that everything is an interconnected whole, so the manifestation of their gratitude to the entire universe is a central principle of their way of life.

I am a soul

The Ashaninkas identify themselves as part of this whole. Their belief system recognizes the existence of the soul as one of the primary premises of their tradition. Everything is a soul, from the plants and animals to the universe. Everything is connected and needs to align.

Therefore, for an Ashaninka it is of utmost priority to take charge of himself and align to the needs of the soul, independently and individually; a pact between me and myself. Therefore, it is my responsibility to behave in adherence to the laws of nature. This is in my interest as a soul, not only because it nourishes me, but also because it contributes to the whole interconnected web of life: everything is one, there is no separation between me and the rest of nature.

It is not easy for us to fully understand what it means to a native Ashaninka to take responsibility, so let’s take an example. If someone in the tribe has a bad stomach, knowing that they mostly consume unprocessed natural food, it will be assumed that this person has eaten something, let’s say some fruit, which was not suitable for consumption. It would not occur to an Ashaninka to blame nature for not providing the right food. In this case, the Ashaninka who fell sick was not in alignment with nature as it was his responsibility to be able to identify that this fruit was not to be eaten.  This very simple example vividly illustrates that all the responsibility for the choice, the action, and its consequences lie entirely with the one who is performing the action.

Philosophically, a parallel could be made between this idea of misalignment and the idea of karma in the Indian tradition: it suggests that it is our obligation to take charge of ourselves in order to do the right thing, and follow the direction traced by Dharma, which is defined as the supreme law of nature.

Natural order and death of the body

According to the writings of Weiss, the Ashaninkas consider human being as souls, that take on a body for this life, and this shapes their view of death. When they speak about death, they consider a natural death in a very different manner than we do. Only a phenomenon that would affect the soul would actually be a non-natural cause of death, for example, if a bad spirit enters a soul and therefore the body starts degrading because the soul is possessed.

Anything else, an accident with severe injuries or someone being shot, is considered a natural death as there is no threat to the soul, but only degradation or death of the body. It wouldn’t matter if the member of the tribe is young or old.

They believe that many Spirits of Nature impact humans on daily basis. These spirits of nature can be represented in tangible forms (the sun, the moon, plants…) but also less tangible, like sickness and diseases. They are the signs of a good alignment or a lack of alignment.

The tradition of the Ashaninka and other tribes of the Amazonian region suggests that shamans have an important role of teaching and helping in correcting these misalignments. They are the critical link between life and its laws. They perform rituals or ceremonies in order to help the members of the tribe to protect their souls, and make the right choices.

Today, though the Ashaninkas are still very connected to nature (between 25000 to 100000 of them still live in the Amazon) the encroaching modern world is taking them more and more away from the roots of their traditions. Its preservation is under threat; their homes, the lands and forests they have lived in for centuries are now being targeted for mining, timber or mass agriculture. Yet, from my investigation and reflections, there seem to be some very practical learnings in the essence of the Ashaninka culture.

They have succeeded in distinguishing between what is essential and eternal from what is temporary and external:  The soul must be nourished and protected from deterioration and decay. The body is but a temporary vehicle to house the soul. This principle is a fundamental shift from the contemporary mindset that has become a slave to the avaricious desires of the body at all levels, physical, mental, and emotional.

Furthermore, if we are all souls, can we work towards reducing the separation at all levels: between human beings, with animals and plants, and even with the environment? May be we can see that the long term solution to our ecological problems cannot just be reducing consumption of fuel, or planting more trees, as good as these causes are. We need to go much deeper, into our innermost perceptions and behaviors of who we are and our role  as an integral part of nature.

The Ashaninkas have successfully internalized and act upon the idea of responsibility to both myself, to the collective, and to nature. Can we as a humanity, shift from a culture of competition to cooperation, from asserting our individual rights, to fulfilling our obligations to each other, from viewing Earth’s treasures as resources, to assuming stewardship and guardianship of this wonderful planet we call Home?

Perhaps in reviving these time-honored traditional principles practiced by so many cultures across the world, we would be reviving some universal principles of ancient wisdom that could heighten our consciousness and strengthen our recognition of our role in the interconnected and interdependent web of life.