The Symbolism of the Ring 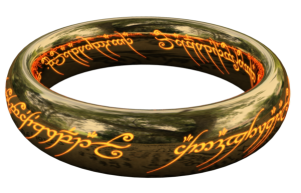 The ring is above all the symbol of a bond, an alliance or a vow. The hole in the middle of the ring channels the celestial influence, the breath of God that seals the pact. The hole is the receptacle for the energy that makes the wheel of destiny turn. The ring is the symbol of the power of great men and gives legal authority when adorned with the seal that grants it. In Greece, Zeus authorizes Herakles to free Prometheus on condition that Prometheus wears an iron ring on his finger in which a chip of rock from the Caucasus is set, as a reminder of his submission to Zeus. Any sort of bond that completely encircles a part of the body locks up its supernatural power, preventing the bearer of the bond to act freely. Buddhists see the ring as the symbol of the indefinite heaven, of a closed circle by contrast with the spiral. It is Heaven, as circle, in opposition to Earth, as square. On the esoteric plane, the ring is associated with the girdle, which guards places and protects secrets. To obtain a ring is like opening a door; to set a ring on one’s own finger is to protect oneself and to place it on somebody else’s finger is to accept a gift from someone else. Rings can also be represented as a circle of fire like the one that encircles Shiva, the cosmic dancer, as a reminder of the Zodiacal circle. In this case, the ring, as the Zodiac or the Ouroboros of the Gnostics, is divided in two parts: one active (evolution) and one passive (involution). This represents the vital process of the Universe and of each of its creatures, through the cosmic dance and the wheel of Nature whose endless creation and destruction enables the evolution of all beings. Many legends of humanity tell us about ring-talismans. In Nordic mythology, these special rings are associated with elves and dwarfs who keep them jealously. They sometimes offer these rings to human beings as a magical protection. These rings bring good luck to their owners, if they keep them, but the loss of the ring means painful disgrace and torments, as Wagner reminds us in the Ring of the Nibelungen, a part of his tetralogy. European literature often mentioned the “ring of Gyges” from Plato: a bronze ring which when put on his finger renders him invisible.