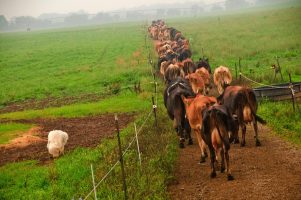 Apologists of industrial farming often claim that this soulless and inhumane way of producing food for human consumption is the only viable way of feeding the world in these times of overpopulation.

However, although the deceptively named ‘green revolution’ (the conversion to industrial farming after the second world war based on pesticides, artificial fertilizers and mass production methods) got off to a hopeful start and initially boosted production levels, its success was short-lived. Soon farmers were going out of business and formerly fertile lands became transformed into dustbowls.

The more natural system of farming which existed previously was based on the mixed farm where different crops were rotated and the manure from farm animals was used to fertilize the soil. Insects and birds contributed to the pollination effort and the whole was relatively self-sustaining.

The temptation of the industrial farming concept was based on the fact that nature is unpredictable, so harvests may fail. By making agriculture less dependent on nature, so the argument went, agriculture could run as efficiently as a factory. What was not taken into account, however, was the enormous pollution produced by the intensive farming of animals, the destruction of pollinating insects by pesticides, the soil-depleting effects of monoculture, and the cruelty to the factory-farmed animals themselves.

A ‘mega-dairy’ housing 8,000 cows indoors produces a huge amount of concentrated animal waste, which pollutes rivers, lakes and groundwater, and the very air that people breathe. In Central Valley, California, low-paid local workers have to buy mineral water because the tap water is undrinkable, the rate of asthma among children is 20% and those who live near factory farms have their lives shortened by a decade on average.

The full effects on health are not yet known, but some researchers link the increasing rate of cancer (one in three people now get some form of the disease) to environmental factors, including pesticides.

The most evident victim of farm pesticides is wildlife. The British Beekeeping Association fears that Britain may lose all its bees in the next decade. Tree sparrows have decreased by 97% in the last 40 years and the population of farmland birds has halved since 1966.

Those who object to farm animals involved being kept in confined and barren spaces with no access to the outdoors are often accused of having an ‘anthropomorphic’ attitude. The co-author of Farmageddon was once asked by a government vet: “how can you say that hens suffer?”  In 2009 a spokesman for a company proposing to introduce a mega-dairy in Lincolnshire declared on the radio that “cows do not belong in fields”.

In the 17th century, Descartes and others put forward the idea that animals are mere automata, which simply react mechanically to stimuli and do not experience pleasure or pain. Unbelievable as it may seem, this view took hold and has held the scientific establishment in its grip until now. However, there is now so much evidence (if such were needed) that animals are sentient beings, that the EU has recognized their status as such in one of its Directives.

Does this mean that things are changing for the better? I believe that the situation is mixed, because on the one hand some sectors of Western society are becoming more aware of these issues, and there are farmers – in India, Mexico and the USA, for example – who have reverted to mixed farming and found it not only morally satisfying, but also profitable.

On the other hand there are countries like China where meat consumption is on the increase and animal welfare standards are horrendous. Battery cages of the old type have been banned in the EU, but ‘enriched cages’ (with perches) are still allowed.

Consumers can help the process of change by making animal welfare and environmental choices when buying food. Even if these choices may not be immediately world-changing, it is a principle of moral philosophy, as Kant pointed out, to do what one believes to be right, as if it would become “a universal law”.

Image Credits: By U. S. Department of Agriculture | Flickr | CC BY 2.0

Image References
By U. S. Department of Agriculture | Flickr | CC BY 2.0

Article References
This article is based on a recent book with this title by Philip Lymbery and Isabel Oakeshott
Tags: agriculture, animals, farming, pesticides, pollution