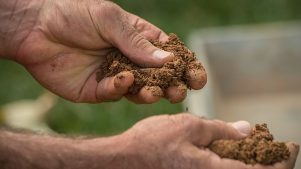 Soil is the uppermost part of the Earth’s crust, the ground of human civilization. It is one of the most crucial parts of our ecosystem. The home of minerals, nutrients, insects and other animals, our food is produced in the soil. Only half of it contains solid materials, while the other half is filled with gas and water. The soil not only produces the components that are necessary for the survival of plants, animals and humans, but also neutralizes contaminants and impurities. It is a living, organic part of the Earth, full of life. Humans are bonded to the soil and highly dependent on it. In history, civilizations flourished and declined thanks to the availability and productivity of the soil. In India, for example, soil moisture deficits, triggered by poor rainfall and high temperatures, caused droughts and famines between 1873 and 1943, killing millions of people.

The growing population of the Earth has required intensive mass production of crops and vegetables. Forests were destroyed, big monocultures appeared, fertilizers were used to create better productivity. In the last century, especially in its later decades, land was used and abused, with the result that the rich, life-giving part of the soil has been shrinking and disappearing. The soil is becoming just a dead skeleton without minerals, germs or insects. When there are no more living creatures in it that can convert the components to nutrients, we have to apply artificial liquids that can help the soil to be productive. With this solution mankind technically just imitates what Nature could do for free, but for a lot of money. Fertilizers mean big business and large sums of money can be asked for them. But the destruction they cause has a long-term effect. Intensive cultivation, together with intensive fertilization is exhausting the soil. Normally, the topsoil is more than 100 cm deep, but overused soils generally have a topsoil depth of only 15-20 cm. It takes decades for Nature to create a rich, productive soil. Mankind can destroy it within a few years. What could the solution to this problem be?

For centuries, before the mass production of the 20th century, agriculture was generally eco-friendly and land was regarded as a precious gift from Nature. Even in ancient times, as in the Middle East, when chemical fertilization was unknown, farmers recognized that rotating crops or leaving the land fallow made it possible to restore or maintain productive soil. For example, under the two-field rotation system half of the land was planted, the other half was left fallow. Later, from the Middle Ages until the 20th century, the three-field rotation system was used, which means that land was divided into three parts. One part was planted in the autumn with rye or winter wheat, and oat or barley in the spring, the other part was used for growing crops, like peas, and the third section was left fallow. With this technique, productivity increased significantly, while the soil had time to reproduce the nutrition and minerals it provides.

Nowadays, some experts in the field say we must return to the old, chemical-free methods to keep the soil alive, otherwise we will have to face famine within decades. According to the UN, with the current soil loss, the world has 60 years of harvest left. Because of the degradation of the soil, and the loss of groundwater, yields are constantly declining on 20% of the world’s croplands. Apart from the fast-growing population, eating habits also boost the overuse of the soil. As more and more people eat meat, a large proportion of the planted crops goes to feed livestock. Many rainforests are destroyed for the sake of land to grow crops for animals. Only 0.01m2 of land is needed to produce a gram of protein from beans or peas, but 1m2 to produce it from beef cattle or sheep: it is a 100-fold difference. The shift in our diet is inevitable: we should reduce meat consumption and go back to a plant-based diet. Even artificial meat is a solution, as it reduces water use by more than 80% and land use by almost 100%. Now is the time to change our habits by ourselves before Nature forces us to do so.