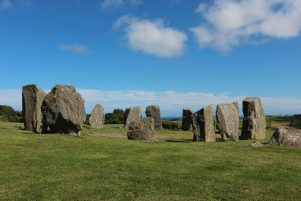 During the course of the last two millennia, ripple effects from endless waves of invasions and migrations have contributed to the Irish identity of today, although preceding tales of misty legends and epics are still expressed by ancient structures, myths and culture.

Ireland’s origins are of vague beginnings, with butchered bear bones carbon dated to around 10,500 BC on its west coast, suggesting indigenous hunter-gatherers amongst the first settlers.

From around 4,000 to 3,000 BC, more innovative tribes settled in Ireland from across the seas. They were advanced in agriculture, reared livestock and built monuments that have stood the test of time, still admired today for their feats of engineering.

They are ancient eminences situated on high grounds across Ireland, thought to be ceremonial sites with astrological implications. One example is Newgrange, a burial mound decorated with megalithic art, displaying carvings of chevrons, serpentine forms, triple spiral motifs and more.

One winter solstice, in 1967, Professor M.J. O’Kelly observed the rising sun illuminating the burial chamber, with light travelling down a narrow passageway through a roof box above the mound’s entrance. Following this discovery, astrological calculations suggest that this illumination would have occurred at exactly sunrise on the winter solstice 5,000 years ago. Nowadays, this phenomenon takes place approximately four minutes after sunrise.

In Celtic mythology, Newgrange is believed to be an old fairy mound and a portal to the otherworld. Depicted as the home of the ‘Tuatha De Dannan’, a supernatural race, children of the Celtic mother goddess ‘Danu’, ‘the divine waters from heaven’.

The Celts were the first documented people in Ireland, arriving around the 5th Century BC. Migrating in separate influxes from mainland Europe they spread out across the island, forming settlements of tribes with polytheistic beliefs and speaking the Gaelic (Irish) language.

There were many tribes in Celtic Ireland, each led by its Chieftain. The tribes had a common culture of language, laws and customs, but were politically disunited, with no collective identity, leading to territorial feuds and rivalry. The judicial system was administered via Brehon law. It is assumed that today’s legal system contains remnants of this previous legislation sanctioned by ancient Irish Jurists.

Celtic tribes had an elite caste known as Druids, made up of priests, astrologers, doctors, arbitrators and poets. Druids conducted rituals in relation to the natural world, the cosmos and annual festivals honouring the changing seasons, such as Samhain, Imbolc, Bealtaine and Lughnasadh.

The druidic teachings are elusive, as there is no known direct literature from them. Lore has it that bards were venerated and oral transmission was encouraged from master to pupil. Learning was through mnemonics, as their knowledge was considered too sacred to be written down.

The only written records we have of the Celts are inscriptions of notches from the Ogham alphabet, mostly etched into standing stones at burial sites. They had strong convictions about the afterlife, believing that the soul crossed over the western ocean to imperishable lands.

They had many Gods, the most significant of whom was ‘Da Da’, who has been compared to the Hindu god Shiva, for his capacity to create, preserve and destroy. The Celts were polytheistic, with a tripartite belief which is symbolised in the infinite webbing of the Celtic Knot. The human being was believed to be composed of body, soul and spirit, the world of Earth, Sea and Air, and the nature of animal, vegetable and mineral.

Some recent historical accounts suggest that the Celtic tripartite theology may be the reason why the Christian Trinitarian theology was welcomed by the Celtic people with little resistance.

Tradition maintains that in the 5th century St Patrick, born in Roman Britain, spent his first 6 years as a slave in Ireland before he escaped and returned again years later as a bishop. Having baptised thousands, ordained priests, and codified certain Brehon laws that contradicted Christianity, he syncretised the new religion alongside the pre-established faiths of Ireland, using the three-leafed shamrock as its Trinitarian symbol.

Around the same time period as St Patrick’s ministry in Ireland, Rome was sacked by the Visigoths. The Romans knew Ireland as Hibernia (land of winter) and it was one of the few places in Europe left unscathed by conquest.However, as Rome declined, Ireland was used as a base, where treasures such as ancient classical literature, that would have otherwise been destroyed, were preserved.

Many Christian monks fled to Ireland, escaping the ravages taking place in Europe. As the shadow of the Dark Ages fell on Europe, a Golden age of Saints and Scholars surfaced on the Irish landscapes. Monastic institutions were formed, and scriptoriums, schools and centres of learning were established across the country.

Christian monks artistically transcribed books in great detail, books of Greco-Roman culture and philosophy, fundamental to the later Italian renaissance, along with compilations of the Biblical scripts.

Much of our knowledge of the Irish Celts is largely due to the literary work of these well-versed Christian monks. What was once an oral tradition was eventually transcribed into stories, poems, traditions and myths with all their Irish splendour, preserving the Gaelic language, one of oldest living vernaculars spoken to this day.

This golden age lasted from the 6th to the 9th century, ending when the Vikings arrived. From then on, Ireland was to endure over a thousand interminable years of oppression by colonial forces.

From the late 19th century onwards, a period known as the Gaelic Revival or the Celtic Twilight emerged, a resurgence of Irish folklore, literature and language epitomised by such acclaimed writers as W.B. Yeats, George Bernard Shaw and James Joyce.