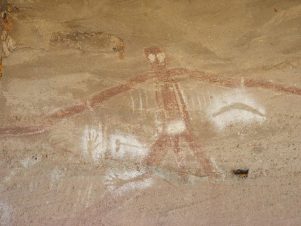 The Australian Aboriginal is a race so ancient that it is reputed to be a descendant of the Gods. Their pre-neolithic culture was alive, intact and undisturbed until merely two hundred years ago. Their mode of perception, in which all of the world is alive with spirit, is imprinted on their language and culture.
The Aborigines claim the physical world is connected to a metaphysical dimension which exists beyond the speed of light. This place is not somewhere in space, it is all around us and it requires only the proper frequency of vibration to be contacted at any given time. This is where the ancestral beings of the Dreamtime reside. The wise men of the tribe, known for their powers in extra-sensory perception and control of the mind, can make contact between the two worlds a regular practice.
Aboriginal cosmology reveals how the first spiritual substance, known as Baiame, composed all physical matter through thought power. It was this supreme intelligence that gave the Aborigines their social and religious laws and instituted the initiation rites. These laws, adopted for optimum living here on earth and in the next life beyond the physical, are shared by all initiated Aborigines regardless of the tribe to which they belong.
Initiated men and women are part of the mainstream of Aboriginal society and culture, despite their absorption in the metaphysical world. It is through them that the community maintains its connections with the powers that created the world and continue to sustain it.
The ceremonies of enlightenment vary somewhat between the different tribes but always take the initiate into the deepest mysteries of conviction and faith.
Where men are concerned the initiation is quite lengthy and very harsh, including circumcision, removal of teeth or some alternative mutilation. A ritual death must be experienced, during which electromagnetic energy is largely withdrawn from the physical body and converted into energies with a velocity greater than the speed of light. Having lost their physical properties and gained the characteristics of the spiritual dimension, a direct link is forged between the wise men and the ancestral beings of the Dreamtime.
It is during this near-death experience that the wise men establish their powers. Healing, divining, practising hypnotism, telepathy, telaesthesia, clairvoyance, holding seances and visiting the sky are among their many abilities.
Women initiates have their own ritualistic ceremonies. Their responsibilities include the harmonising of emotions, love, magic, maintaining social and cultural harmony, caring for children and the land, and food gathering. Many of the Dreamtime stories initiate young men into the hidden powers of the feminine. However, it is only after men have obtained the highest degree of male initiation that they become eligible for initiation into women’s law.
In Aboriginal culture, the feminine intuitive mode of knowledge and decision making is valued above the external, rational, male reasoning, as demonstrated through the importance placed on dreams and the psychic and spiritual world. Studying the ramifications and possibilities of the mind in the psychic sphere has been essential for the continuous development and progress of culture.
As a result of Christianity’s influence on ancient traditions, we in the West have amputated this level of experimental approach from our consciousness. Our freedom of thought, the most powerful force in the universe and the answer to all future progression, has been inhibited.
The potential to become a force for change resides within us all. With more and more people rejecting the materialistic and individualistic allure of Western culture, we might yet see the practice of indigenous principles re-established. And with it, a sane and responsible relationship between humankind and the rest of creation regained.