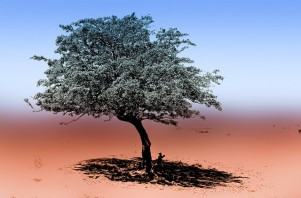 With its roots burrowing deep into the soil and its branches rising to the Heavens, the tree is universally seen as the symbol of the connection between Earth and Heaven. The tree enjoys such a central role that the World Tree is identified with the World Axis. Trees are also the bridge that connects the three planes of the cosmos: the Underworld through their roots burrowing deep into the soil, the Earth’s surface with their trunk and lower branches, and the Heavens with their upper branches and top, in search of light. So, trees relate the Lower World to the Upper World. Reptiles crawl among their roots and birds roost in their branches. The four elements are to be found in the tree: Water circulates in its sap, Earth becomes part of its body through its roots, Air feeds its leaves, and Fire is produced by rubbing its sticks together.  This representation of the relationship between Earth and Heaven is often to be found in philosophy and spiritual meditation : the tree is then the symbol of Creation as a whole : it is the macro-cosmos or big Universe. Trees are also the symbol of man, as small universe or micro-cosmos. Ever rising to the Heavens, trees are the perfect symbol of verticality.   The many symbolic representations of trees are all related to the notion of the living cosmos in a state of perpetual regeneration. Their annual cycle is associated with the natural development of life, death and regeneration. Trees symbolize life in perpetual evolution.   We have to mention a particular symbol : the inverted tree with its roots turned towards the Heavens and its branches falling downward to the Earth. According to the older texts of India (Rig-Veda) and the western alchemical treatises, the inverted tree reveals the celestial origin of man and invites him to free himself from terrestrial bonds, in order to find in himself, behind the veil of illusion, his own interior Heaven of the same nature as the Holy Heaven itself.   Nearly all ancient peoples had sacred trees, either real or idealized, promoted to the rank of cosmic symbols. The most ancient natural religions considered trees as true living beings inhabited by spirits of nature, nymphs or elves, having their own soul and with which man had a particular relationship.   The cosmic tree is often represented as a particularly majestic species. So was the oak for the Celts, the lime for the Germans, the ash for the Scandinavians, the olive tree for the Islamic East, the larch and the birch for the Siberians. All these trees are remarkable for their size and their longevity.  The tree as axis of the world is the one around which the world assembles itself, like Yggdrasil, the ash of the Germans of the North or Ceiba or Yaxché, the sacred tree of the Mayas in Yucatan, which grows in the centre (or navel) of the world and bears the various planes of Heaven. The same idea is to be found in China with the tree Kien-mou whose branches and roots touch the heavens and the underground springs where death hides itself.  According to Buddhists,  Boddhi, the tree under which Gautama Buddha became Enlightened, is the symbol of the Great Awakening. Ancient Egypt worshipped sycamores where the goddess Hathor drew a beverage and food that she gave to the dead or more precisely to their souls. The Sumerian god of vegetation Dummuzi or Tammuz was worshipped as Tree of Life.   Christian tradition associates the Tree of Life with the manifestation of the godhead. There is an analogy between the tree of the first Covenant, the Tree of Life in Genesis and the tree of the Cross or tree of the New Covenant, which regenerates mankind.   In time the tree-ancestor became the family tree. Let us recall the famous tree of Jessé  symbolizing the sequence of generations of which the Bible tells the story and which culminates with the coming of Jesus Christ.   It seems that a comparison between man and tree has always existed. Either man transforms himself into a tree (like Daphne, mistress of Apollo, who was transformed by her lover into a laurel) or the tree becomes man or woman. Tree symbolism is always ambivalent and it is not surprising to find it, alternatively, male and female. The gender ambivalence of the tree symbol, simultaneously phallic by his trunk and womb-like by the hollows inside it, becomes more evident with the evolution of language: the tree was female in Latin and became male in the Roman languages of the Middle Ages. Thus the double tree, simultaneously phallus and womb, symbolizes the individuation process in which the inner opposites in ourselves unite.   The tree has also been regarded as an image of the androgyne or primordial hermaphrodite. It is also linked to the athanor of the alchemists, womb in which the philosopher’s gold gestates.  The main symbols associated with the tree are the cross and the mountain.